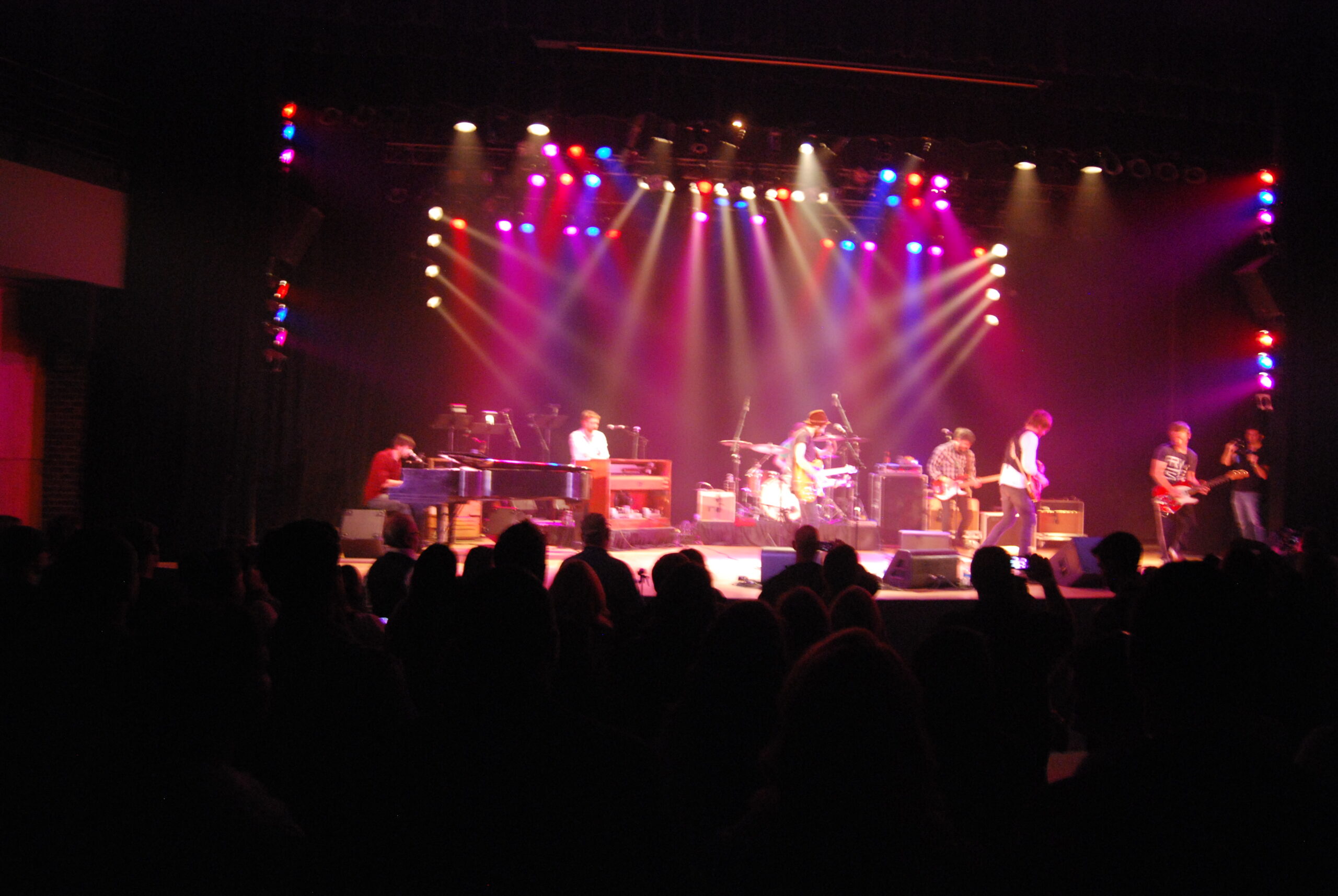 Crowfield’s Goodbye, Goodnight, So Long show was nothing short of amazing. On Friday, March 15th, the local Charleston five-man band got up on stage to perform their last concert as a group. After six successful years together, Tyler Mechem (guitar/vocals) Parker Gins (drums/vocals), Ben Meyer (bass/vocals), Whitt Algar (keys/vocals), and Ryan Holderfield (guitar/vocals) collectively decided that it was time to part ways and move on to other interests. Everyone in the theater that night could tell they didn’t want to leave.

The evening began with a song writer in the round pre-show that included Luke Cunningham, John Wesley Satterfield and Ryan Bonner-some of Crowfield’s closest friends. An hour later, Crowfield took the stage and their fans went wild. Lead singer, Mechem, could hardly believe the love that the audience was giving them from start to finish. With each song (there were 28 of them!), everyone in the crowd belted out the lyrics to their Southern Rock/Americana tunes as if they were the ones telling the story. Every now and then someone would yell out “Don’t break up Crowfield!”, showing the band how much they are truly appreciated in the Lowcountry scene. In between the songs, Mechem made sure to give his thanks as well.

As the night went on, Crowfield brought out surprise guest performers who have played with them in the past, such as various guitarists, a section of horn players and standup bassist, Jonathan Gray. Their first set was made up of older material, which was not any less known than the more recent songs that were played after intermission. With the set break, it seemed like the crowd got even more energetic and sentimental for the second half of the show. Which, of course, made it harder for Crowfield to leave the stage.

The decision to break-up certainly could not have been easy for the band. But they now know that at least the 800+ people that filled the Charleston Music Hall will always remember them for the way they shared their stories. Crowfield has permanently left their mark on Charleston by the lives they touched through their music. They have left a legacy that no one will forget.
– Sarah Roza, CMH Intern

Comments Off on Crowfield 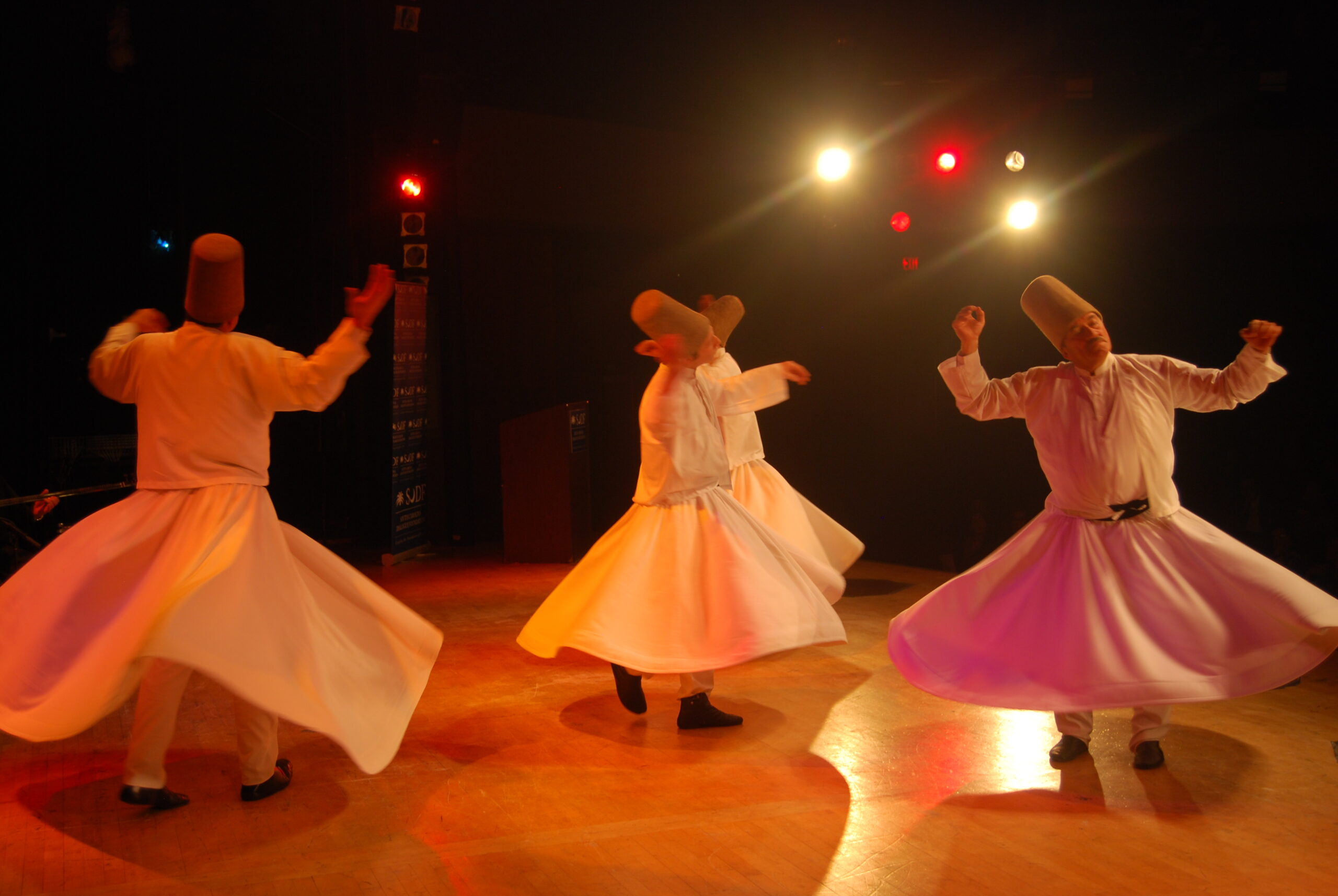 On Wednesday, March 13th the Charleston Music Hall welcomed the Whirling Dervishes of Rumi to its stage for an enlightening performance of personal and spiritual revelation. Presented by the South Carolina Dialogue Foundation and hailing from Konya Mevlana University in Turkey, the Dervishes delighted the audience by offering a look into an essential part of Turkish customs, history and culture. The performance was a “meditation in motion”, in which the Dervishes were accompanied by mystical music consisting of flutes, strings, percussion, a chorus and poems by Rumi.  The origin and roots of Sufism lie in the life and practices of the Prophet of Islam and the Qur’an. Sufism espouses a well-founded and thoroughgoing interpretation of Islam, which focuses on love, tolerance, worship of God, community development, and personal development through self-discipline and responsibility. A Sufi’s way of life is to love and be of service to people, deserting the ego or false self and all illusion so that one can reach maturity and perfection, and finally reach Allah, the True, the Real. The Order of the Whirling Dervishes is one branch of the vast Sufi tradition of Islam. The universal values of love and service shared by all Sufis are very much relevant to the social and political realities of today, and this ritual, which is only performed by the Order of the Whirling Dervishes, has come to symbolize these values in the hearts and minds of millions throughout the world. The Whirling Dervishes program is performed for audiences to translate one of the remarkable ways of achieving this state of sublime: the way of Rumi, the great Muslim mystic and poet. Due to the traditional and religious manner of the performance, audience members were unable to applaud until the Dervishes had left the stage. The acknowledgement that they were in the midst of something both extraordinary and unique, however, was evident from the respectful silence and mutual captivation demonstrated.

Comments Off on Whirling Dervishes 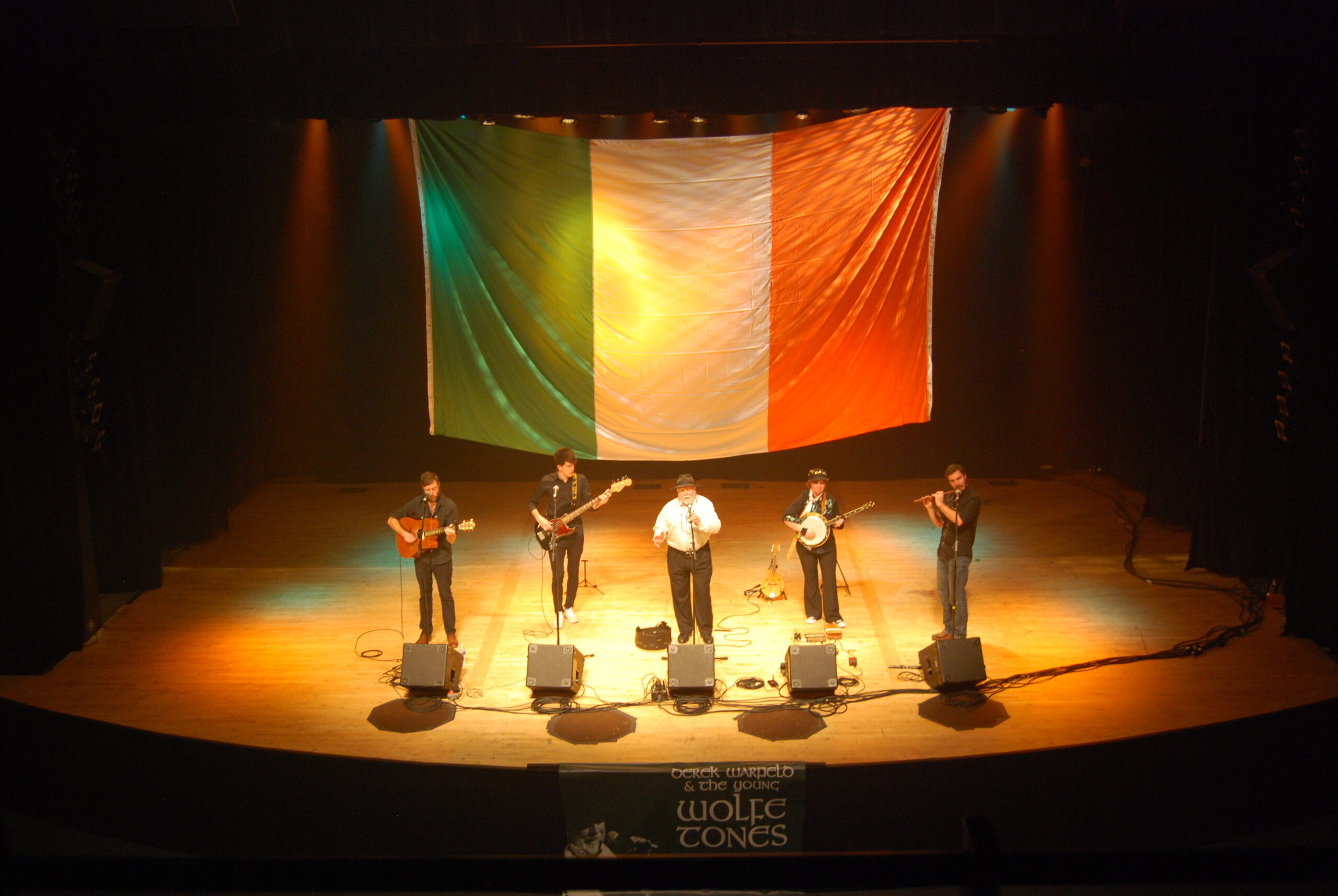 The SC Historical Irish Society recently graced our venue with the ever-talented Irish-Folk outfit Derek Warfield and the Wolfe Tones. One of the jolliest Irishmen you’ll ever meet, Derek has spent just over 50 years on the road, bringing his gift of song to thousands of audiences worldwide. Derek made his first appearance on-stage at the age of six, and since then has performed everywhere from Carnegie Hall in New York City to Royal Albert Hall in London, as well as numerous radio and television appearances along the way. The evening began with a brief introduction by Gary Allan, President of the SC Irish Historical Society, before welcoming Derek and his four-piece band to the stage. Derek jokingly suggested that the audience make themselves comfortable, as it was likely they would be there until around five in the morning. The band consisted of acoustic guitar, electric bass, Irish flute, Irish banjo, and all five members on vocals. The multi-talented Derek brought out his Irish bodhran drum for several of the songs, rousing a cheer from the audience of about 500 people. Throughout the evening, the music was lively and conjured images of old Irish pubs and dancehalls. The band’s songs are steeped in story, and Derek provided the audience with a back-story to each song. The content of the songs ranged from tales of young love to the sinking of the Hunley submarine, and none failed to move people’s hearts and feet. During intermission, Derek and the band could be seen mingling among the crowds in the lobby, shaking hands, taking photos and laughing with their audience members. The night had a true feeling of community, and there seemed to be no separation between those on stage and those in the audience. The second set opened with a lively jig, and it seemed as though the night was only just beginning. The show only got better as the night went on, and after a near 3-hour long set, the band regrettably had to wind down the show, and closed out the night with a rowdy rendition of the national anthem (of America, that is). The crowd gave a standing ovation, Derek proclaimed “God bless America, and God save Ireland!”, and the crowds left while still singing and humming the songs of the evening. The night was a coming together of cultures, hearts and minds, and this is exactly what the Charleston Music Hall is all about.

Comments Off on Derek Warfield and the Young Wolfe Tones 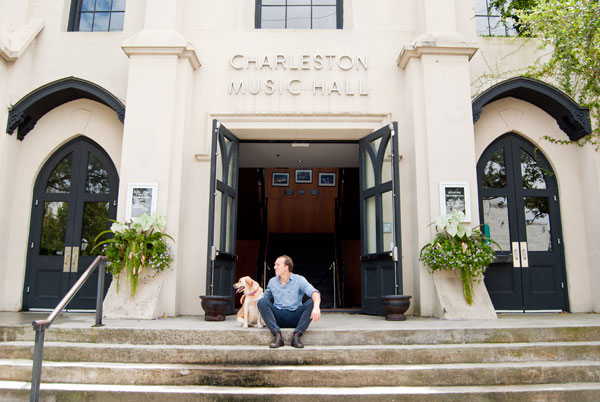 Welcome to the Charleston Music Hall Blog. My name is Charles Carmody, and I am the director of the Charleston Music Hall. I started back in July 2012, and I have loved every minute of helping breathe life into the Music Hall.  I get to wear many hats at the Music Hall doing everything from booking shows, to marketing and graphic design, to managing our wonderful ushers, bar, and box office, to helping with lights, sound, and tech, to maintenance, and yes, even bathroom cleaning. Even though the days can get very long, I feel incredibly lucky to be working at one of the best venues in my favorite city on earth, Charleston.

We have had an incredible year thus far at the Music Hall. The Charleston Jazz Orchestra, our resident big band jazz group, helped kick off the year with a tribute to John Coltrane and will be performing five more shows in the Hall this year. The great Jeff Mangum graced our stage playing to a sold out crowd. We kicked off the Charleston Music Hall Local Series with The Holy City Pop Show: Explorers Club, Slow Runner, and Luke Cunningham. We kicked off our bluegrass series, Grass in the Hall, with Town Mountain, Cumberland River, and The Barefoot Movement. We kicked off our dance series with an Argentinian Tango Troupe. We hosted SEWE this year and got to play with penguins, foxes, and eagles. Shovels & Rope played a homecoming show to a sold out theatre. Sol Driven Train got down with their CD release party. Elise Testone played to a sold out crowd for a very special Valentine’s Day show. Crowfield also played their final show ever in the Hall. Whew! It is hard to believe it is only March.

We also have some amazing events on the horizon. Our Local Music Series, Grass in the Hall series, and Dance Series, are all gearing up for subsequent shows. We are kicking off our Live at the Charleston Music Hall Series, a live filmed for TV show, (think Austin City Limits meets Inside the Actors Studio). Sam Bush and Edwin McCain will kick off the show March 30th. The amazingly funny comedian, Bill Burr, will be throwing down some jokes on April 11th. DIG SOUTH, Charleston’s premier tech conference, will be holding sideshows in the Music Hall, Danger Muffin, Lee Fields, and more April 12th and 13th. We are also hosting one of the best Celtic bands in the county, Solas on May 10th, and the list goes on and on.

With all this action going on at the Hall, we wanted to make a way for you to join in on the action and keep up with the fun. We are going to be using this blog to post pictures and write ups about each show, so that you can follow along with the crazy great things that are going on at the Hall these days. I hope you enjoy following along, and I hope to see you in the Music Hall sooner than later.

Comments Off on Welcome