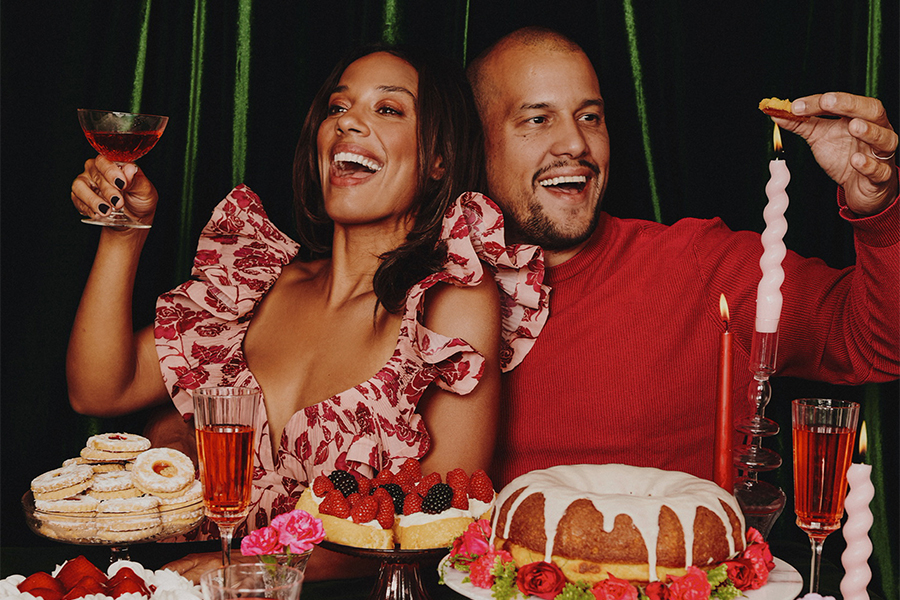 “We’re JOHNNYSWIM and this is what we do.”

JOHNNYSWIM have always had a plan. The duo, Amanda Sudano Ramirez and Abner Ramirez, write and record an album, and then tour, connecting with fans around the world on the road. All of their records, since their 2008 debut EP, have been driven by that desire to give life their songs live—which is why the past two years stuck at home have been such a challenge for the band. JOHNNYSWIM, the band’s fourth full-length album, created during the heart of the pandemic, forced the pair’s to embrace a new process of making music.

“It reminds me of our first project,” Abner explains of the album, which was written and recorded at the pair’s home in Burbank over the past two years. “There was nobody else— nobody to bounce songs off or gauge a response from. This process was us alone, mining for these thoughts and moments of creativity. A lot of that happened as we were in this mourning process as the world was being shut down. We were finding out how we felt about things, whether it was relationships or family or how things were changing, as we wrote. It almost feels like our re-introduction to the world as JOHNNYSWIM.”

The album, produced by Abner out of the duo’s guest room, shines a light on relationships and the challenges that have emerged in a changing world. “Big Time,” which was written and recorded in a single session, was inspired by friends whose values have changed, while “Devastating,” the album’s first single, reflects on how marriage shouldn’t be an idealized, glossy thing. “This album is full of our honest thoughts on what real romance looks like and what friendship looks like and what loss looks like,” Abner notes. “It feels truly like a Polaroid of us right now in music form. If you could hear that Polaroid, that would be this album.”

The duo re-partnered with GRAMMY Award-winning producer and songwriter, Malay (Frank Ocean, Sam Smith), their producer on 2019 album Moonlight, for two tracks: “Nostradamus” and “I Keep Getting Older.” The latter, a deeply emotionally-wrought song, sees Amanda questioning what life will look like on the other side of 40. “That has brought up a lot of emotions,” she explains. “What have I done? What do I still want to do? I still get scared by new things, and I thought by now I would feel ready to be more brave. As you get older, are you going to diminish your dreams to make them feel more safe? This song is like a self-help book for myself.”

During the writing process, Amanda and Abner connected with Harold Brown, who co-wrote and co-produced “Bullet” and “Slow,” a tune about the growth that can come from a time of stillness. The pair also resurrected “Desmond’s Song,” which they wrote 15 years ago—before they were even engaged. Rapper Tobe Nwigwe brought his voice to the ethereal song, inspired by the character of Desmond on Lost.

One of the most poignant moments on JOHNNYSWIM arrives on “Heaven Is Everywhere,” a track that appeared in Abner’s head while he was in the shower as if he’d heard it somewhere before. “When I started singing this chorus in the shower I felt like what was inside of me was bigger than the whole world and I wanted to share it,” he recalls. “I find, whether it’s in church or in politics, that people get so obsessed with right and wrong and their certainty of it. And in church there’s this idea that if you do all the right things, you’ll go to heaven. But I feel God everywhere. I believe heaven surrounds us. If we experience the beauty of this life, even through the drudgery and the misery, there’s glimpses of heaven around us at all times. My hope with this song is that people can feel that when they hear it and sing it.”

That sort of hopefulness threads through the album, even as the musicians grapple with serious issues. It also marks a notable evolution for JOHNNYSWIM, who have been making music together since Abner and Amanda met in Nashville in 2005. Although Abner often jokes that the band is a ruse for him to spend time with his wife, the duo has been successfully building a career as an independent artist ever since. The husband and wife partnership, who tied the knot in 2009 and now have three kids, are two people passionately chasing their dreams with an authentic voice. Their relationship and adventures on tour have been documented on Magnolia Network show The JOHNNYSWIM Show and in JOHNNYSWIM’s 2021 book Home Sweet Road. The band also debuted a series called “Live From the Backyard” during the pandemic, featuring special guests like Tobe Nwigwe, Anthony Ramos and Hanson.

JOHNNYSWIM has always given voice to life’s ups and downs, with Amanda and Abner translating the memories, moments, and milestones on their journey into spirited and soulful anthems steeped in singer-songwriter tradition. This album, purposefully self-titled, is something more. Instead of succumbing to challenges and an uncertain new way of working, the pair stepped up to create their most dynamic, compelling album yet.

“This has been the most isolated we’ve been in a creative process,” Amanda reflects. “But part of that has been really nice because instead of going off what we feel other people are responding to we’re really just trusting our own instincts and saying what we feel we need to say in the way we need to say it. In a lot of ways, I feel like it’s the most ‘us’ a record has been in a long time.”

“Hopefully it gives sound to some of our collective struggle as humans for the last few years,” Abner adds. “If we could bleed music it would sound like this album.”