Ball in the Hall: A New Years Eve Extravaganza

with The Artisanals, Babe Club, and Keon Masters 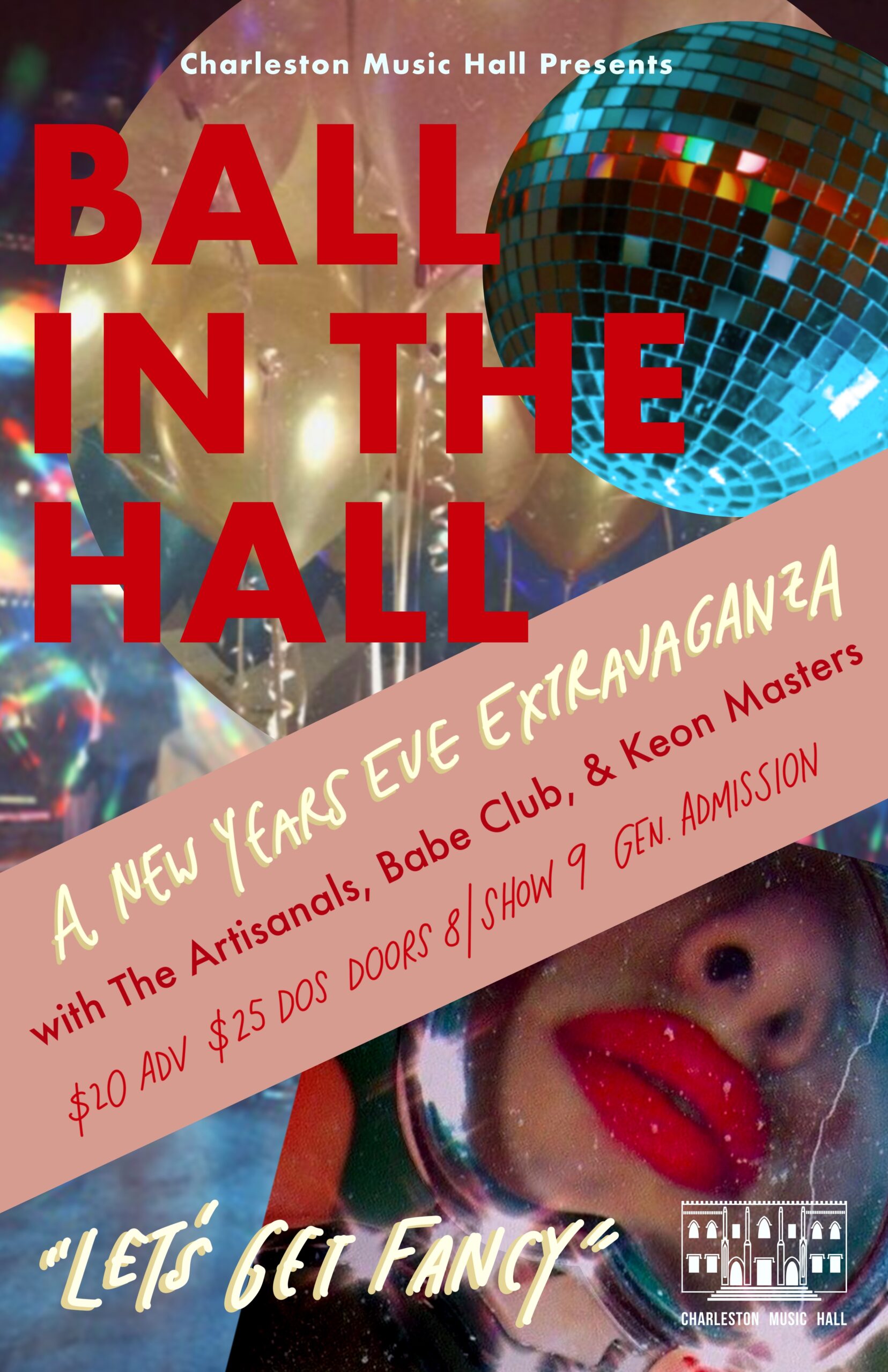 The Charleston Music Hall and The Royal American are thrilled to present Ball In The Hall: A New Years Eve Extravaganza with three of our favorite local bands – The Artisanals, Babe Club, and Keon Masters! This night is a celebration of the Charleston music scene and The Royal American has been an integral part of cultivating this scene by giving local artists a stage to perform on so we think it is only fitting to team up with them for this show. From southern rock to indie pop, this concert will have you dancing all night. Don’t miss out – Royal American will be at the show slingin’ a special champagne punch in their signature cups! Let’s get fancy y’all!

Frontman, Johnny Delaware lives in a wide-eyed perspective baptized in the setting of a John Mellencamp song. “You have to be awake in this life”  –

Before Johnny’s stint with Charleston based SUSTO, Johnny found himself as a solo artist from a small town in South Dakota. Eventually, life would take him to Albuquerque, NM, Nashville, TN, Austin, TX,  and Charleston, SC where he met  Atlanta with native guitarist and collaborator Clay Houle. Both teamed up to write and conceptualize  what has become The Artisanals. It is the culmination of the collective’s years of unique individual experiences writing, recording, touring, and living life.

After releasing their debut self titled LP Sep 2018 via AWAL, The Artisanals began their nomadic lives wandering about the US and Europe bringing their psychedelic swagger, and southern rock to various venues. In the past year, they shared the stage with friends: Band of Horses, Car Seat Headrest, Shovels and Rope, Dylan Leblanc, and Roadkill Ghost Choir and received critical acclaim from Huffington Post, Paste Magazine, Daytrotter, and PopMatters among others.

Working with producer Wolfgang Zimmerman ( Band of Horses, Susto) The Artisanals incorporated unusual instruments like a sitar, 12-string acoustic guitar, a gong, a Japanese koto, French horns, cello other  Eastern influences, reminiscent of George Harrison. They were the first band to record at the Magic Barn in Iowa City, a studio previously based in NYC that has a lengthy history in of itself  was another inspiring element for the band. They recorded using a 1970 NEVE 80 Series  used for David Bowie’s final album “Blackstar,” Coldplay’s “Viva La Vida,” Lou Reed’s “Magic and Loss,” The Ramones’ “Mondo Bizarro,” Kurt Vile’s “Smoke Ring for My Halo” and Arcade Fire’s “The Suburbs.”

“Inspiration is like an invisible ghost,” says Johnny Delaware. “It’s your friend, and it kind of takes you over. You’re a conduit for it. That’s what musicians are; these modern-day shamans that take inspiration and give it form through song. It’s a lot like magic.”

Their new single “Violet Light” produced by Drew Vandenberg  (Toro y Moi, of Montreal, Kishi Bashi) has been Praised by Rolling Stone as having been “built to preach the gospel of rock n’ roll,” The Artisanals hold iconic predecessors Tom Petty, George Harrison, and Jackson Browne close to their chest.

The band has created a kaleidoscope of… edgy rock that recalls the best of Jackson Browne, Dawes and Delta Spirit. The production tinkers with rock hits from the 70’s and 80’s, immediately reflecting a nostalgic vibe but remaining equally vibrant and relevant.” – Glide

“Violet Light” also produced by Vandenberg. Is the first released track from their forthcoming record – We can expect the record to be out in early 2020.

In 2013 Corey Campbell and Jenna Desmond of Babe Club met in college. Jenna, a psychology student, would sneak into the piano practice rooms to write songs, where she met Corey who was studying music. Shortly after meeting, they began trading demos back and forth on their phones. Post college, they toured together in the indie rock band, Susto, playing supporting roles, where they honed in on their writing style. They continued collaborating, passing laptops back and forth between van seats, Eventually piecing together the vibes and songs that make Babe Club.

“After 9 months of heavy touring, having some time off made me realize I had no solid female friendships. I had no one to relate to about the changes I was going through personally, and the changes we were all going through as a country. I was pretty insecure at the time, and I got sick of being on the defense when people would assume things about me. This song was me about taking accountability for myself, understanding that change doesn’t happen overnight, it takes time. This song is about longing for companionship, and stability and that s—t takes work!!

“I lost contact with a lot of ladies in my life at first and felt alone because I had no one to relate to. So hence “I hate myself”. I think in general when people start working full time, everyone gets busy, and keeping friendships and staying social is really hard sometimes.”

Babe Club has just finished recording their first EP with producer Dan Gleason of Grouplove. A release date is will be early 2020 . In the meantime, they will be collaborating and writing with their friends.

Having been with his band Brave Baby for the greater part of a decade, Keon Masters is gearing up for the release of his solo debut “Many Thanks.” A smooth and spazzy pop gem of 8 tracks that clocks in at a cool 28 minutes. “I never really wanted to go ‘solo’ but here I am, and I think it’s pretty dope.”

The 29 year old resides in Charleston, SC, the south eastern coastal hub to many artists and musicians alike because of it’s bohemian, no-car-required, lifestyle. “Many Thanks” is an emotional, sarcastic and humorous record that finds beauty in the mundane and is not afraid to poke fun of itself. It is very much a look into the brain of a man in his late twenties, managing the reality that college was a long time ago, 40 isn’t too far away, marriage is hard and debt is very real. The album is Indie-Pop by nature, but is saturated with sampled drum breaks, glitchy synth hooks, groovy bass and a slight penchant for the acoustic guitar.