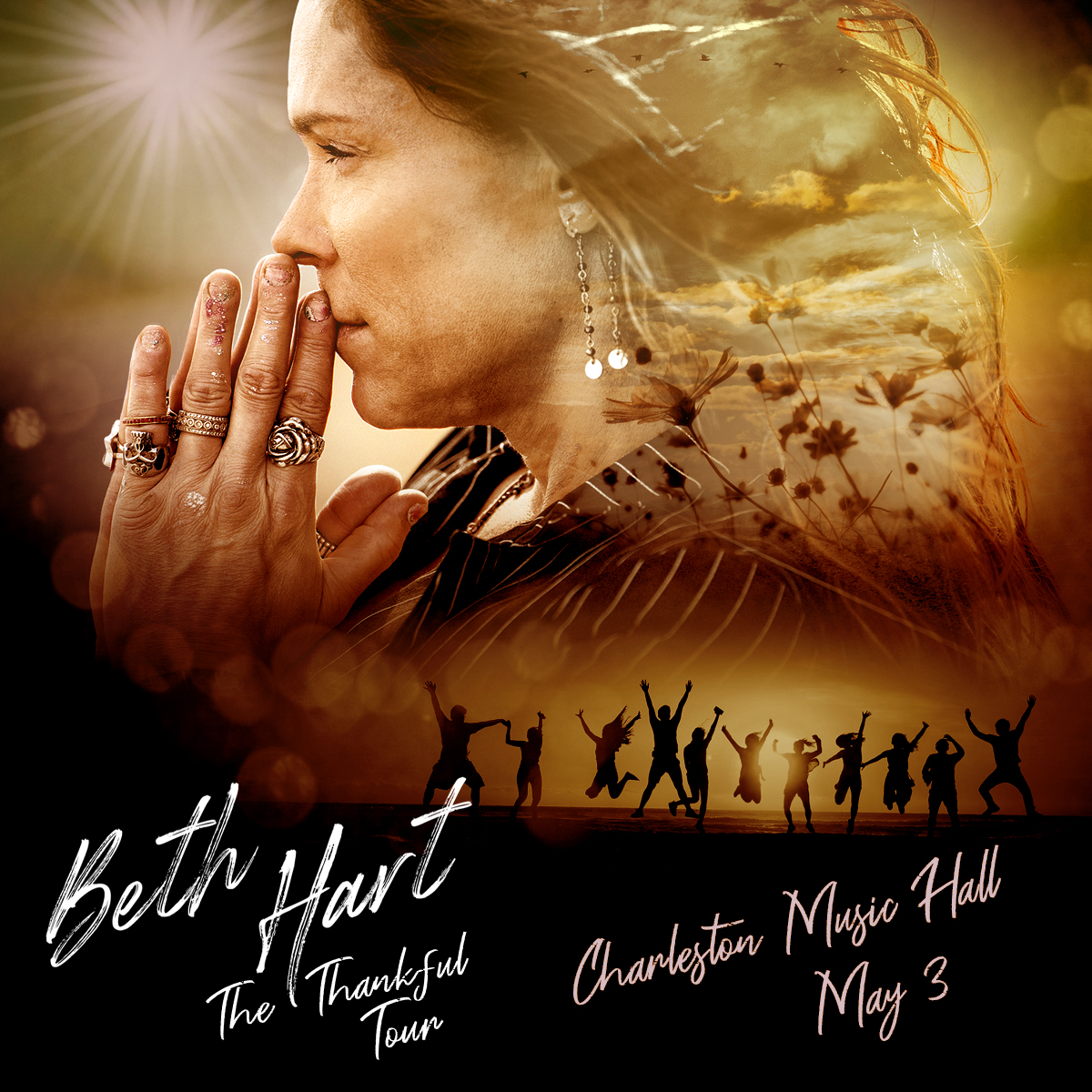 Beth Hart is as real as it gets. In a music industry full of glossy production and airbrushed photoshoots, this is one artist who throws down her cards, shares her darkest secrets and invites you to join her for the ride. With War In My Mind, this Grammy-nominated talent has never served herself up so raw on a record, one that embraces her merits and flaws, channels her bittersweet headspace and spins gold from her demons. “More than any record I’ve ever made, I’m more open to being myself on these songs,” Beth explains. “I’ve come a long way with healing, and I’m comfortable with my darknesses, weirdnesses and things that I’m ashamed of – as well as all the things that make me feel good.”

At 47 – and proud of it – Beth is basking in a golden period of time. The success of 2016’s Fire On The Floor album has garnered yet more critical acclaim, growing sales and sold-out shows at iconic venues from the Ryman Auditorium to the Royal Albert Hall (scene of last year’s triumphant live DVD). But as the singer reminds us, her life has always moved in cycles – “things get good then go to crap, get good then go to crap” – and it’s in these extremes that many of her best songs are born. “A lot of subjects are covered on War In My Mind,” she reflects. “I’ve always tried to seek the truth on every record I’ve done. But on this album, I’m even closer to vulnerability and openness about my life, about love, addiction, my bipolar, my dad, my sister…”

New fans might know Beth as the all-conquering global icon, dubbed “extraordinary” by The Times and “daring, brooding and angry” by The Guardian. But to understand her rollercoaster backstory, you need only read the War In My Mind lyric sheet. Highs and lows alike are candidly recounted as the songwriter reaches back through the decades and tells her tale without flinching. There are memories from her ’70s childhood in Los Angeles, where Beth announced her musical talent and renegade spirit, while rolling with the punches of a chaotic upbringing – about the loss of her beloved sister, Sharon – about the personal problems that derailed what should have been her major-label breakthrough in the mid-’90s – about her collaboration with blues-rock maestro Joe Bonamassa – about the redemption offered by her husband Scott, and the rebirth she found through the church.

War In My Mind also wraps up a frustrating strand of unfinished business for Beth. Back in 2003, the heavyweight producer Rob Cavallo was in the frame to mix the singer’s Leave The Light On album. “But the producer I was with at the time,” recounts Beth, “went ahead without my approval, turned the mix in to Rob – and he passed.” Fast-forward 15 years, and at a chance dinner party attended by the Green Day and My Chemical Romance producer, fate intervened. “I’d just written the songs Rub Me For Luck, Woman Down and Sister Dear, about my sister Susan,” Beth remembers. “The host wanted me to play them on piano, and I thought people would prefer me to just sit, eat and zip it, but in the end I just said, ‘OK, frick it’. After I’d played them, Rob came up and said, ‘You’ve grown a lot as a songwriter – and I want to record these songs with you’. And he turned out to be one of the coolest people that I’ve ever worked with.”

The immersive sound of War In My Mind is visceral and alive, every song a testament to Cavallo’s production smarts – and the golden touch of mix engineer Doug McKean. “But actually,” counters Beth, “I think one of Rob’s greatest talents is that he completely allows artists to have their own vision. Never once did I have anything disappointing happen to one of these songs.”

The sleeve shot of Beth pounding a piano below her own personal stormcloud is a fitting representation of new material that hits like a force of nature. Opening with a gospel chant and irresistible groove, Bad Woman Blues is the anti-love song. “I wrote that with Rune Westberg,” she says, “whom I’ve written with on and off for years. It’s about a woman who doesn’t have any interest whatsoever in being good, because she knows she’s not. But instead of hating herself for it, she’s very clear with the man. Like, ‘Baby, I’m an asshole and a frickin’ witch, but you are gonna have fun with me’. Rob built some instrumentation around it – but really, that is the demo.”

A stately piano ballad that swells to an epic anthem, the title track explores the addiction-troubled years when Beth felt she couldn’t go on, and the salvation offered by the charismatic minister Pastor Kim. “One day, Kim announced that she had to leave and go to another church. So I jump up, start screaming and crying – and I went home and wrote War In My Mind because I thought that without her, I would go right back to drinking; also that I would be more insane than ever. But she reassured me that I could visit her – and I still go out to see her a few times a year.”

The bittersweet jazz of Without Words In The Way benefits from a stark vocal that Beth initially disowned. “I’d been singing all day, so I didn’t have the pipes I like to have for a take. But the song is about a woman who’s never going to get this man to love her – so who the frick is gonna sing good on a song like that? It’s gonna be all pain, stress and struggle. So that vocal actually ended up working out great.”

Let It Grow is so emotionally honest that its mere mention brings Beth to the brink of tears. “That song is just about having so much hope in the face of being hopeless. I wrote that one with Rune, too, and when I looked over during the take, I saw that Rob was crying. I thought we should have a gospel choir on there, so Rob went and got the best frickin’ choir – and it was like they brought a church to this record.”

The sleeve notes confirm that Westberg was also a collaborator on the stunning ballad Thankful – though Beth also gives a salute to an uncredited third songwriter. “Rune and I were in the room writing, and we’re not getting anywhere, but it’s always fun. And then, all of a sudden, Thankful came together really fast. It felt like God came into the room. And we both cried, because we felt like in that one great moment, we got a little taste of heaven.”

If the hedonistic groove of Try A Little Harder evokes the tumbling dice of the Vegas Strip, that was Beth’s intention. “It’s me jumping into my father’s body back in the ’70s when he was a high-roller,” she explains. “They’d fly him every weekend to Vegas and set him up in the hotel, ’cause he spent so much frickin’ money. He was a psychotic gambler. So I’m using his mania for being a baccarat player and my mania for making music. My father and I are so much alike, it’s ridiculous. That song makes me feel confident, happy, and more forgiving of my bipolar disorder.”

Elsewhere, we’re reminded of Beth’s talent for blurring genres on the sultry flamenco of Spanish Lullabies and the cinematic-sounding Rub Me For Luck (“Rob actually told me that one should be in a James Bond film”). Sugar Shack even has a disco flavour to fill any dance floor. “I think I’m always gonna run around on different styles,” considers Beth. “Right now, I’ve been taking a lot of writing inspiration from the songs of mid-century America. So who knows what the next record will sound like…?”

Having followed the fascinating career of Beth Hart for a quarter-century, we’ve learned not to rule anything out – so long as it’s real. And now, with War In My Mind, this songwriter has made a record that bares her soul, wears her heart on her sleeve, and makes no apology for it. “Y’know,” she concludes, “when we did the photoshoot for this new album, it was the first time that I said, ‘No makeup and no airbrushing’. It was the first time that hearing my voice back didn’t make me sick. It was just neat to be 47 and not trying to be young, and competitive, and all of these things that I’ve always felt like I’m supposed to be. On this record, something told me, just let it be what it is, man. I think I’m starting to make a little headway, getting closer to the truth. And I might not know what the truth is… but I’m OK with that.”

Davy Watson is a singer, songwriter and musician from Belfast. With influences from the world of Rhythm and Blues, his songs speak to the Heart & Soul.

As a young bass player and singer Davy toured with Philip Lynott and Bob Geldoff. He travelled all of Ireland playing such venues as the iconic Dandelion Market and Leixlip Castle. A move to Los Angeles saw him playing and recording with Jack Lancaster, Hazel O’Connor and Madonna. Davy formed ‘Trinity’ with Vivian Campbell and was produced by Shel Talmy (Who, Kinks). His song ‘Only Love’ was used in CBS’s prime time series ‘Live Shot’. Davy was also a featured artist on L.A.’s famous KLOS radio.

Returning home, Davy built on his success in America by regularly touring and recording with Jack Lukeman, Henry McCullough and Gráinne Duffy, playing Glastonbury and other prestigious festivals and venues throughout Europe. Most recently he opened for Beth Hart at the Royal Albert Hall and on her European Tour. Davy was also awarded a Masters Degree in Music and Media Technologies from Trinity College, Dublin.

In August 2018, Davy performed his music with the Ulster Orchestra to a sell-out crowd in the iconic Ulster Hall, Belfast. A DVD and CD of this concert was released in September ’19. 2022 will see Davy release new music with his band – DWB.