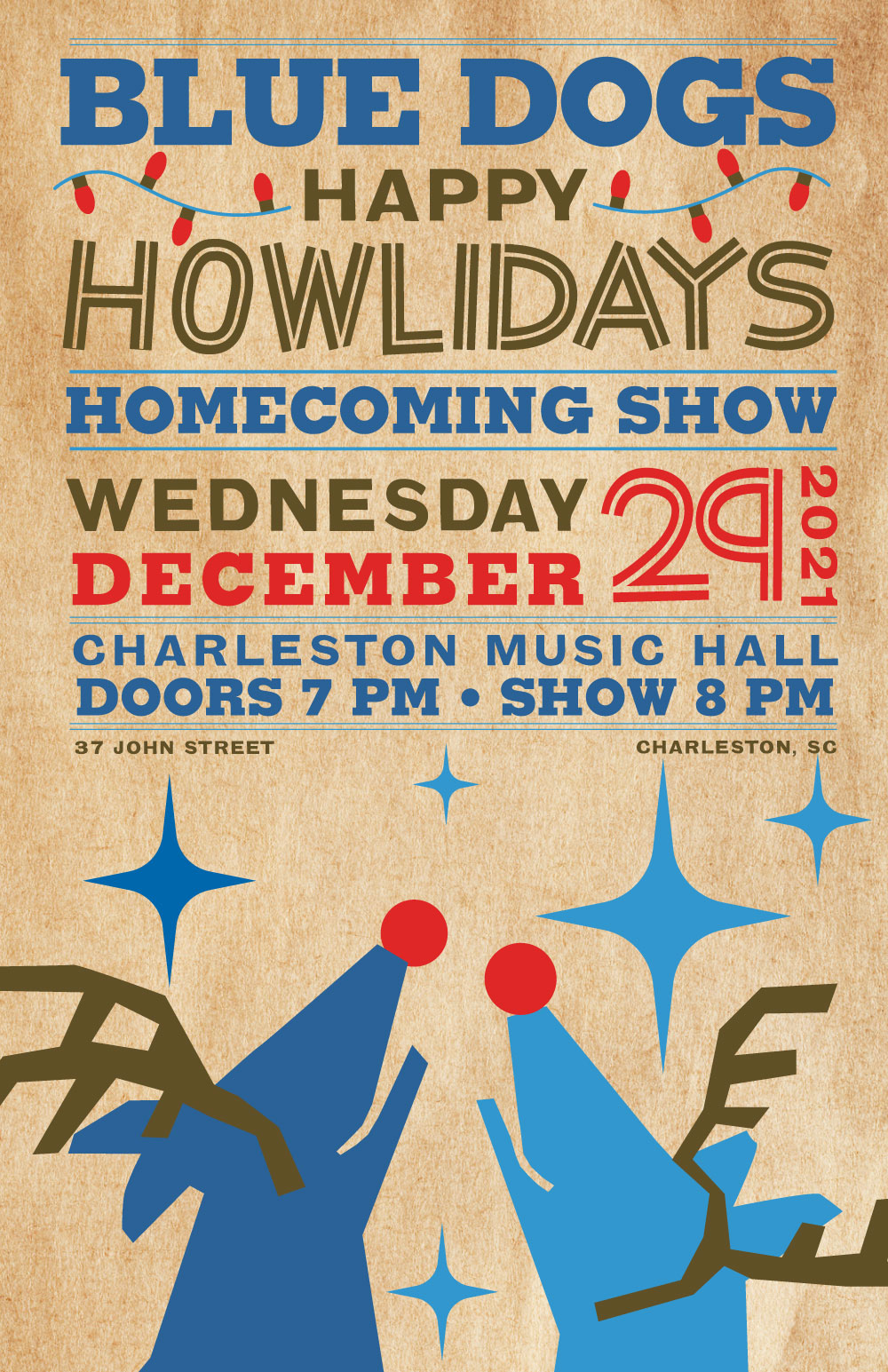 In 2021, Charleston’s Blue Dogs finally return to the Charleston Music Hall on Wednesday, December 29, 2021, to resume an annual event that began with their 25th Anniversary Show in 2013.

They will come back to a full-capacity Music Hall to celebrate the return of live music, their 34th Anniversary, and the release of a new holiday EP, “Happy Howlidays,” being released digitally everywhere during Thanksgiving.

After 2019’s triumphant CMH show with the likes of Jerry Douglas and Alison Krauss appearing with the band, the pandemic prevented the 2020 show, and is also preventing them from participating in fundraising activities for MUSC at an indoor show in 2021. With help from sponsors and fans, the Blue Dogs Homecoming shows raised nearly $400,000 for pediatric cancer over five years, and they plan to resume fundraising in 2022.
So, unlike in previous years, the 2021 show will focus on the Blue Dogs themselves, with past members of the band sitting in, along with a few special surprise guests sure to join the party.

As it turned out, the Blue Dogs did not sit idly by during the pandemic, but they did something they’ve wanted to do for a long time: make new music. And they came away from the summer of 2021 with 3 new projects well in hand: the holiday EP, original kids music to be recorded in the near future, and, most importantly, an album’s worth of new original songs to be released in 2022.

Since 1987, South Carolina’s Blue Dogs have been blending the genres they grew up with – bluegrass, country, rock, and soul – “turning bluegrass on its ear by creating what’s now referred to as ‘Americana’ or ‘alternative country’ before those terms were commonplace” [Charlotte Observer, 2012]. More than thirty years later, The Blue Dogs continue to serve up that southern stew for happy audiences.

Acoustic guitarist Bobby Houck and upright bassist Hank Futch, lifelong friends and natives of Florence, SC, founded the band in the late 80’s after recognizing that Futch’s exposure to early country and bluegrass by his guitar-pickin’ dad, mixed with Houck’s early education by his sister of the incomparable singer-songwriters of the ‘60s and ‘70s, produced a special sound. Making Charleston SC their home base in 1990, they were joined by another SC native, Phillip Lammonds, a songwriter right at home in the Dogs’ kennel, who was accomplished on mandolin and harmonica while mightily flatpicking acoustic guitars and playing slide electric guitars with beer bottles. What became a prolific writing partnership between Lammonds and Houck on their first recording of original songs, Blue Dogs (1997), continued with creative input from Futch and other band members on their subsequent studio releases Letters from Round O (1999), and Halos and Good Buys (2004). The band worked with world class producers John Alagia, David Lowery, and Don Gehman on those three projects respectively.

Fans that have joined them along their journey stay close to the pack for the strong likelihood of a good time and the loose unpredictability of their live shows, elements which became the catalyst for the success of their annual December shows (starting in 2013) at the Charleston Music Hall. A homecoming for their extended family of band members and special musical guests, the show is filled with surprises and also doubles as a benefit for the band’s charity of choice, pediatric cancer research. Most recently, in 2019, the band was joined by dobro master and 14-time GRAMMY winner Jerry Douglas, along with a surprise guest performance by the top female GRAMMY winner of all time, Alison Krauss. In the 7 years they’ve hosted the concert, The Blue Dogs and guests like Darius Rucker, Drivin n Cryin, Edwin McCain, Radney Foster, Wyatt Durette and more have helped fetch nearly half a million dollars for the Medical University of South Carolina, while providing 1000 fans with a unique show to cap off each year.

Nine albums, two DVDs, and over three decades of touring and sharing the stage with a range of artists that includes Willie Nelson, Hootie and the Blowfish, Cracker, Bruce Hornsby, and Widespread Panic have earned the Dogs a loyal and continually growing fanbase, as well as a 2018 induction into the South Carolina Lowcountry Music Hall of Fame. Houck and Futch, along with longtime drummer Greg Walker, guitarist Dan Hood, pedal steel player Charlie Thompson, and a cast of players that come from the entirety of the band’s history, make up the band in 2020 — often joined by mandolin, fiddle, keyboards, or a three-piece horn section. They continue to perform on a regular basis, at clubs, festivals, and special events of all kinds. Currently, they are working on projects including new original material, a Christmas album, a compilation for kids, and fundraising ventures including their annual Homecoming show.