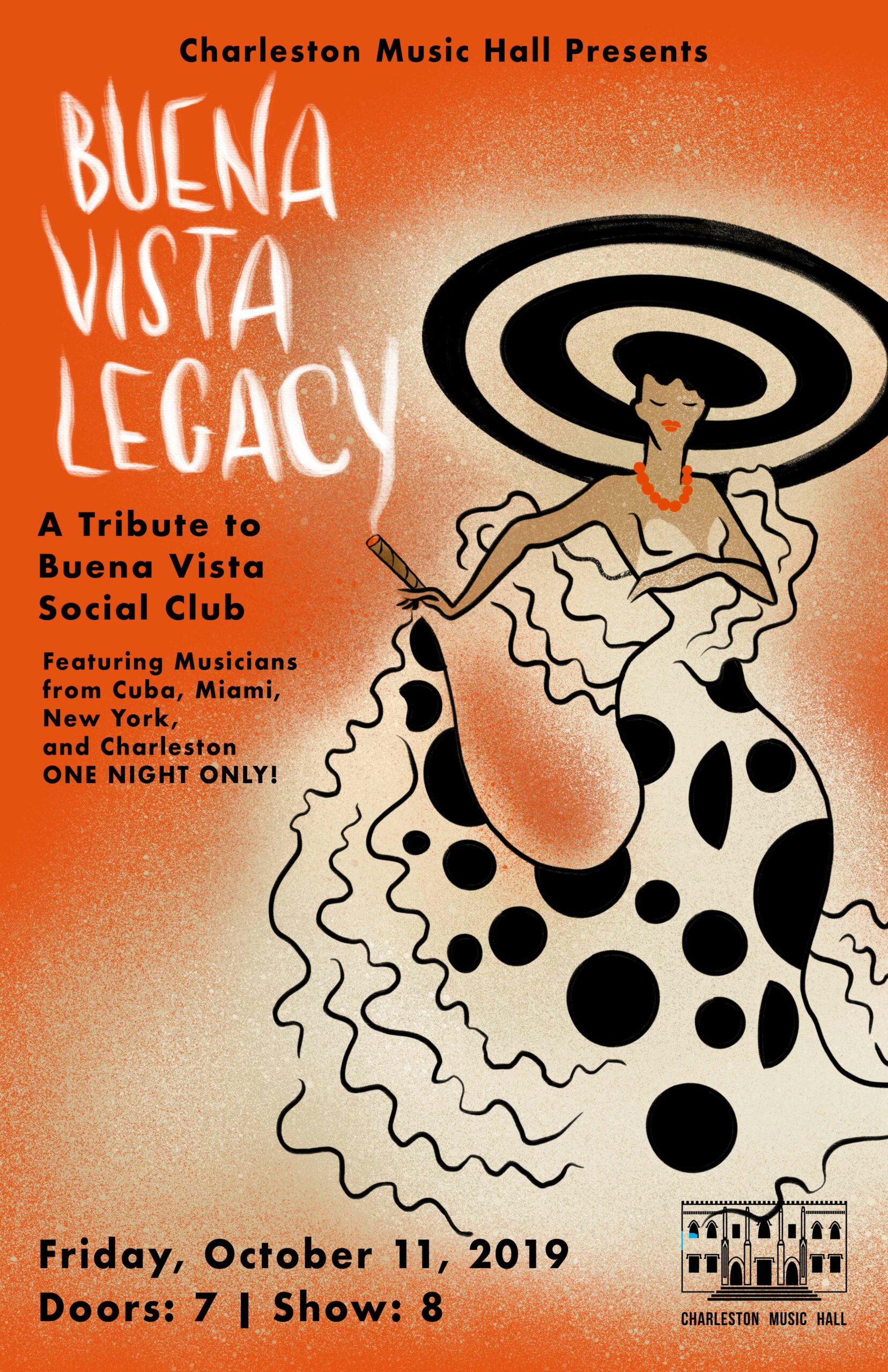 The Music Hall is teaming up with Gino Castillo to put together an amazing band for this one night only event. The band will play through Buena Vista Social Club’s iconic 1997 album in its entirety. This breakthrough album, produced by Ry Cooder, represents a resurgence in Cuban music as it broke into mainstream America and payed homage to “the music of Cuba’s golden era, the 1940s and 1950s, with the original musicians of that time.”  Rolling Stone described the album as possessing “rare and unconventional beauty.”

Gino Castillo, a well-known Charleston based Conga player and past collaborator with the Charleston Music Hall on shows like Strings and Salsa, has put together a stellar band to bring this album to life. We are flying in musicians from Cuba, Miami, and New York to create the authentic Cuban feel, as well as assembling some of the best players in Charleston to put together a supergroup of sorts. The musicians include: Yusa (Tres, Vocals), GIno Castillo (Congas, Vocals), Abdiel Iriarte (Piano), Jake Holwegner (Upright Bass), Mark Rapp (Trumpet), Ron Wiltrout (Bongos, Timbales), Oliver Valdés (Drums), Jorge Garcia (Guitar) with more musicians TBA. Come celebrate the authentic sounds of Cuba with Buena Vista Legacy: A Tribute to Buena VistaSocial Club.

Juan de Marcos González, the founder of the Afro Cuban All Stars and Sierra Maestra, had a long cherished dream of recording the music of Cuba’s golden era, the 1940s and 1950s, with the original musicians of that time. This was a dream that he shared with Nick Gold, the owner of World Circuit. Together they planned to record a collaboration between a number of African and Cuban guitarists. Gold invited Ry Cooder to participate, the two having worked together before on Ali Farka Toure’s Grammy Award-winning ‘Talking Timbuktu’ (WCD040).

The album has an intimate, natural charm that comes from musicians totally at ease with other, sharing a deep passion and understanding for the music, playing a repertoire suggested by themselves. Arrangements and instrumentation were worked out during recording according to the feel of the individual songs, and the vast majority of the performance was recorded ‘live’ in one or two takes.

The album features the vocals of septuagenarian Ibrahim Ferrer, a star from the 1950s who was literally called in off the streets on the first day of recording after years of musical inactivity . Also on vocals is the only woman on the album, the great bolero singer, Omara Portuondo “the Edith Piaf of Cuba” (Cooder). Omara happened to be in another studio rehearsing and Cooder invited her upstairs to record. On piano is the brilliant Rubén González veteran of Arsenio Rodríguez’s early 1940s band whom Cooder describes as “the greatest piano soloist I have ever heard in my life.” On guitar and vocals is Eliades Ochoa the great country musician who was flown in for these recordings from Santiago in the east of Cuba. The oldest musician on the album is the 89 year old giant of Cuban music, guitarist and vocalist Compay Segundo. According to Cooder, “the whole album turned on Compay. He was the fulcrum, the pivot. He knew all the best songs and the way to do them. Well, he’s been doing them since World War One.”

These featured musicians are joined by a host of Cuba’s greatest players including Orlando ‘Cachaíto’ López on bass, Manuel ‘Guajiro’ Mirabal on trumpet, and the percussionists from the band Sierra Maestra.

The album includes an extraordinary variety of Cuban styles from the city sounds of Havana to the country style of Santiago and the songs cover a range of the island’s history, from ‘La Bayamesa’ written in 1869 to ‘Chan Chan’, a recent composition by Compay Segundo” You can read more about the album at www.buenavistasocialclub.com.