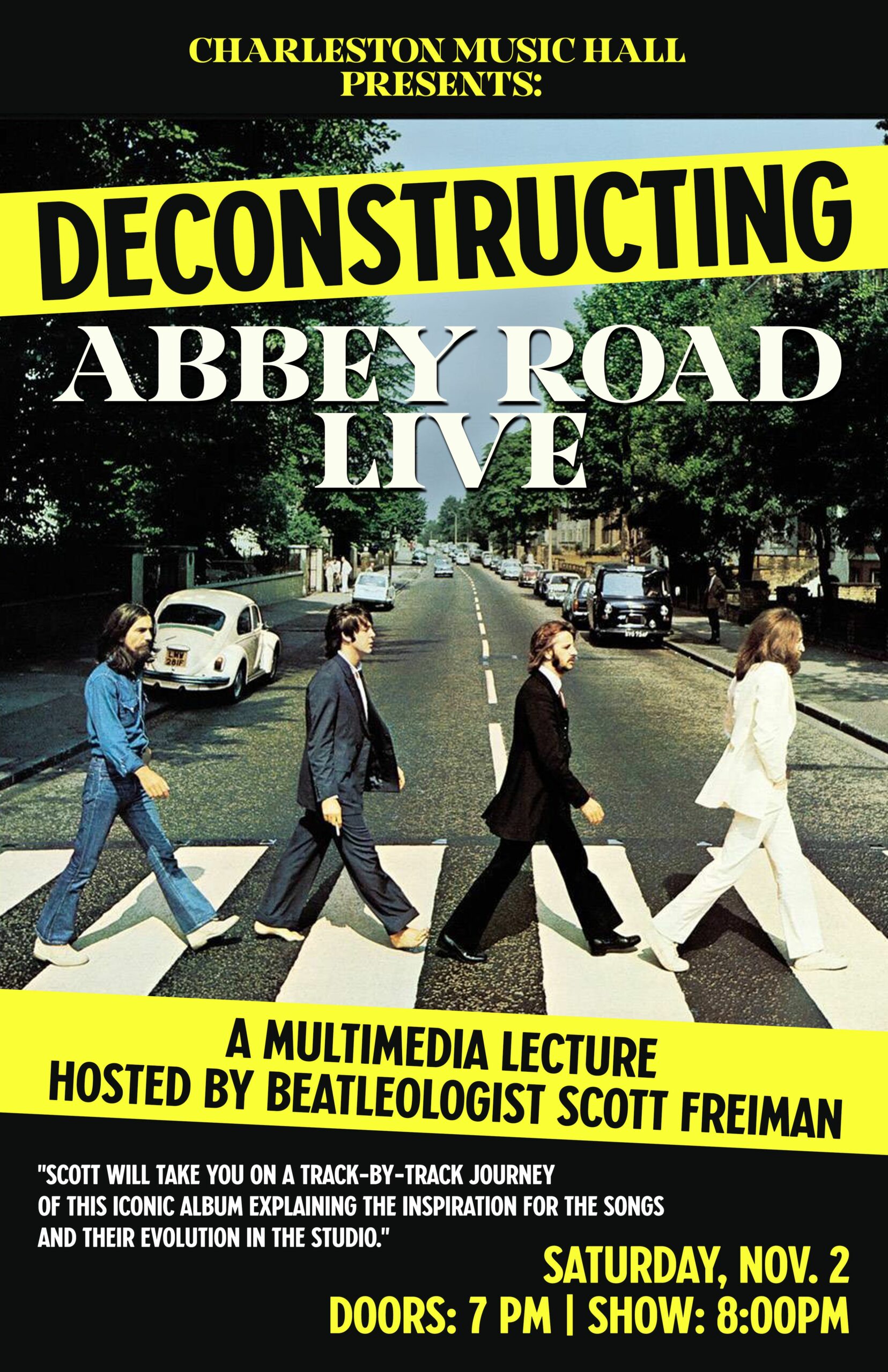 Charleston Music Hall is excited to present Deconstructing Abbey Road Live: A Multimedia Lecture Hosted by Beatleologist Scott Freiman on Saturday, November 2nd at 8pm. Scott’s presentation will transport you to Abbey Road Studio with tales of the Fab Four’s recording sessions there. You’ll experience Abbey Road like you never have before. In Deconstructing Abbey Road, Beatleologist Scott Freiman has created one of his most in-depth “deconstructions.” Scott will take you on a track-by-track journey explaining the inspiration for the songs and their evolution in the studio.

The Beatles’ Abbey Road is a masterpiece filled with classic Beatles songs, such as Come Together, Something, and Here Comes the Sun.  George Martin told the Beatles to think “symphonically,” and they responded by creating the remarkable side two song suite.

Abbey Road was the last time that the Beatles recorded together at EMI Studios — soon-to-be-christened Abbey Road Studios after the album’s release. Despite the bittersweet atmosphere that surrounded the recording sessions, The Beatles’ outstanding songs and performances together with George Martin’s orchestrations produced an album that continues to be regarded as one of the best albums ever created.

Scott Freiman is a composer, a musician, and a software entrepreneur. Mr. Freiman is the CEO of Qwire, which creates collaborative cloud-based software that addresses significant problems with music licensing and royalty payments for film and television. Scott is the creator of Deconstructing The Beatles, a series of multimedia presentations about the composition and production techniques of the Fab Four. Mr. Freiman has presented his lectures to sold out audiences throughout North America at theaters, museums and corporations, such as Pixar, Google, and Facebook. Scott has also lectured at colleges and universities and has taught a 13-part course at Yale University entitled The Beatles in The Studio.

Scott Freiman combines his love of The Beatles with his experience as a composer, producer and engineer to deliver unique educational lectures about the creative process of the Beatles. He moves past the personalities of the four Beatles to uncover the reasons why their music continues to be loved by millions.

Scott’s multimedia presentations transport his audiences into Abbey Road Studio with anecdotes about The Beatles’ recording sessions, allowing fans to experience the evolution of The Beatles’ groundbreaking albums and songs.

Scott’s lectures have entertained audiences of musicians and non-musicians alike, from pre-teenagers to octogenarians. Once you’ve attended one of Scott’s presentations, you’ll never listen to The Beatles or any other music the same way again!

You can learn more by checking out his website:
http://www.beatleslectures.com/fd4dflhvnfktgijohwqack47ercet5