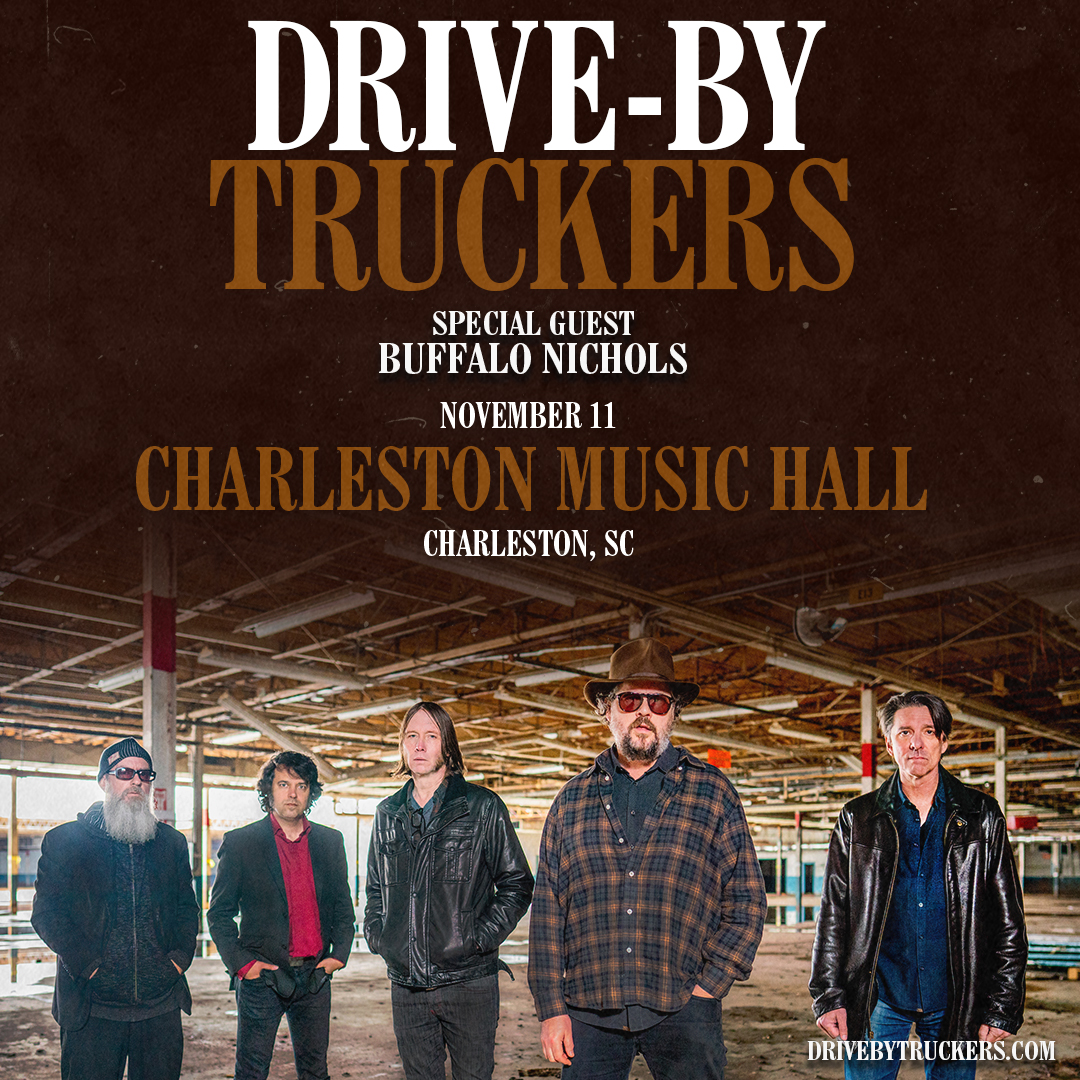 An overview of our journey from post-election blues, into the heart of Memphis and onward into 2020 with a new album.

Drive-By Truckers is kicking off the new election year with The Unraveling, our first new album in 3 1/2 years (the longest space between new DBT albums ever). Those years were among the most tumultuous our country has ever seen and the duality between the generally positive state of affairs within our band while watching so many things we care about being decimated and destroyed all around us informed the writing of this album to the core.

While a quick glance might imply that we’re picking up where 2016’s American Band album left off, the differences are as telling as the similarities. If the last one was a warning shot hinting at a coming storm, this one was written in the wreckage and aftermath. I’ve always said that all of our records are political but I’ve also said that ‘politics IS personal’. With that in mind, this album is especially personal.

Our 2018 single “The Perilous Night” acted as a sort of coda to the polemic of the last album and the original plan was to zigzag in a different direction, but alas the past few years have seen an uptick in school shootings, church shootings, racial violence, suicides and overdoses, border violence, and an assault on so many things that we all hold dear. They’re literally putting children in cages. Writing silly love songs just seemed the height of privilege.

My partner Mike Cooley and I both worked through deep pools of writer’s block. How do you put these day to day things we’re all living through into the form of a song that we (much less anybody else) would ever want to listen to? How do you write about the daily absurdities when you can’t even wrap your head around them in the first place? I think our response was to focus at the core emotional level. More heart and less cerebral perhaps.

Eventually the songs did come, some in mysterious ways. A day-long layover at an exit outside of Gillette, Wyoming resulted in “21st Century USA”, the song that for me opened up the floodgates, enabling me to write my portion of the album.

I wrote “Babies in Cages” in the living room of my wife’s parent’s house and quickly demoed it on my phone. A portion of that original recording acts as the introduction to the version on the album. Cooley wrote “Grievance Merchants” about the proliferation of white supremacist violence we’ve seen in recent years. Our family’s babysitter’s best friend was murdered on a train in beautiful progressive Portland, Oregon in one such incident. The political is indeed very personal.

“Armageddon’s Back in Town” takes a whirlwind joyride through the daily whiplash of events we are collectively dealing with, while “Slow Ride Argument” offers an unorthodox but hopefully effective method of the prevailing of cooler heads. Perhaps it should come with a disclaimer though.

Meanwhile “Awaiting Resurrection” dives headfirst into the void of despair and painful realities these times are tolling. It’s a song unlike any in our band’s history, yet somehow quintessentially DBT to the core. A call to deal, unblinkingly, with the horrors surrounding us all, but to also survive, with perhaps even a hint of optimism.

If the writing was a long and brutal process, the recording was a joyous celebration. Another of our band’s many dualities, perhaps.

We convened for a week in Memphis, Tennessee at the historic and wonderful Sam Phillips Recording Service. We tracked, mostly live in the studio, aided by long-time producer David Barbe and famed engineer Matt Ross-Spang. Initially recording 18 songs in 85 hours of near around the clock sessions, the band essentially spent the whole week in an artistic marathon, housing ourselves at the Memphis Music Mansion (AirBnB), surrounded by historic photos and a mid-century vibe that seemed to even seep into our dreams each night. (My bedroom was, fittingly, The Big Star Room, named after the seminal Memphis power pop band that I have always held as an all-time favorite).

Recording in Memphis has been a life-long dream for this band. Both the city, with its dark social history and amazing musical heritage, and the studio which is a time machine set to its early 1960’s origins and inhabited by the spirit of its genus founder, affected and inspired the creation of this album in ways that go far beyond the tangible and technical.

Sam Phillips left my hometown of Florence, Alabama and moved to Memphis, working in radio before opening the legendary Sun Studios (Memphis Recording Service) where he essentially discovered Rock and Roll, recording the first records of Howlin’ Wolf, Ike Turner, Johnny Cash, Carl Perkins, Jerry Lee Lewis, Charlie Rich, and of course Elvis Presley. When he sold Sun, he built his dream lair, the, then state of the art Sam Phillips Recording Service which opened in 1962. If Phillips’ love of ‘slap-back’ echo had given those early Sun records their legendary sound, his new studio incorporated three different echo chambers into its design, giving the studio a very unique and wonderful sound that we incorporated into this album.

I can’t impart enough the impact that recording there had on this album. We were all beyond inspired by the surroundings and the sounds coming out of the speakers from every playback or the sound of the echo chambers reverberating down the halls. Every day we got to hang out with Sam’s son Jerry who took us up to Mr. Phillips’ old office on the third floor. Unlocked in time, it was still exactly as it had been the last day Sam spent there. His jackets still hanging in the closet and the bar still stocked with his favorite whiskey. There, with Jerry, we toasted our recordings and the spirits that still inhabited that sacred space.

In honor of finally getting to record in Memphis, I wrote “Rosemary with a Bible and a Gun”, a sort of stream of conscious love song to that dark and mythical city on the banks of the Mississippi. Although the song isn’t a literal story of such, it was certainly informed by the brutal times Cooley and I had in 1991 when we followed Sam Phillips’ example and moved from Florence to Memphis in search of dreams that for us were still to be over a decade in coming. I heard the song in my head as a sort of Bobbie Gentry inspired southern gothic and we further explored that by adding gorgeous strings by Kyleen and Patti King (arranged by Kyleen). It seemed the perfect way to kick off this album.

Our sessions were rounded out by a guest appearance from Cody Dickinson (North Mississippi All Stars) who came in and played an electric washboard through an Echoplex and wah-pedal into an amp for “Babies in Cages”. The song, recorded completely live, in one magical take, perfectly captured the mood and tone of the week we spent there. (We even kept the scratch vocal since it had so much live bleed from the take). The following day, Mick Jagger came by, but alas we weren’t able to record with him, although his presence certainly added to the already surreal vibe of the week.

A few months later we reconvened in Athens, Georgia at Barbe’s Chase Park Transduction studios where Matt and David mixed the album on Barbe’s vintage 1975 Neve console. As a band that got its start essentially making albums as field recordings on mobile gear, it is indeed a treat to get to make our albums on 2” 16 tracks tape in historic studios and on beautiful vintage gear. We finished the process by having the legendary Greg Calbi master it all at Sterling Sound in Edgewater, New Jersey.

In the end, we whittled the album down to the nine songs included, saving several key songs for a foundation to the next one that will hopefully occur sooner than later. Lilla Hood designed the packaging utilizing a stunning photo by Erik Golts of two young lads watching a sunset at the Oregon coast, lettering by famed graphic artist Aaron Draplin, and once again beautiful artwork from our long time collaborator Wes Freed. We plan on touring extensively throughout the next year taking these songs around the world.

We hope to see you there.

For all the moonlighting he’s done in other genres over the years, Carl Nichols always comes back to the blues. At various points in his career Nichols has played gospel (despite being an atheist), West African music (despite being born and raised in Milwaukee) and, as one half of the acclaimed folk duo Nickel & Rose, Americana (despite having some deep reservations about that genre’s long history of appropriating black music without always welcoming black musicians). None of those gigs, however, extinguished his desire to play the kind of traditional, acoustic blues he grew up admiring.

Maybe on some level he’s pathologically drawn to spaces where he’s an outsider. As a twentysomething black musician, Nichols is all too aware that the modern blues scene doesn’t look much like him, but he never outgrew his childhood love of the music. “It seemed cool to me when I was young,” he says. “You’d just hear people like Lightnin’ Hopkins or R.L. Burnside, and they just seemed cool. That’s why anybody gets into music, because it speaks to them.”

And it continues to speak to him, so much so that he’s tabled Nickel & Rose just as the duo was establishing itself as a major folk festival draw to pursue his dream of returning the blues to its songwriter roots. “I think a lot of what’s been lost in the blues since the early ’60s is the black experience, so I try to sing about that,” Nichols says. “I can’t escape racial realities, but I’m also aware that my audience is different than me, so the way they receive my message is different. I have this nostalgia for an era where blues musicians sang about their experiences to their own people, but that audience isn’t there now.”

It’s a challenge, he admits, but there’s power in crossing racial and generational divides. And on a personal level, he sees Buffalo Nichols as a form of justice for the music he’s always loved. “I want to redeem the blues after all the experiences I went through when I was younger,” he explains. “When I first started getting into the blues, my mom would take me to blues shows, and inevitably there’d be some old white guy there who would try to take me under his wing and explain ‘the rules’ of the blues to me. It chased me away.

“I always related to the blues,” Nichols concludes. “I grew up in abject poverty. I experienced racism. And when I would sit down with a blues record, I could hear that in the songs. Now I want to be that person that I never got to see on stage.”