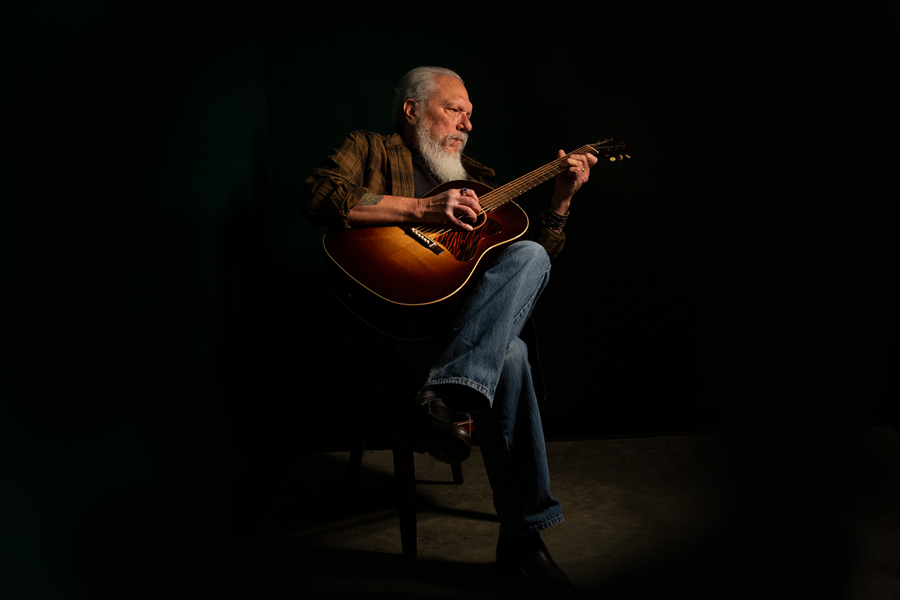 A Brief History of Jorma Kaukonen

“A pioneer of San Francisco psychedelia, Jorma Kaukonen is a bona fide graybeard folk swami. He mostly lays back, a master in situ, unfurling melodies and savoring every note. – Rolling Stone Magazine

In a career that has already spanned a half-century, Jorma Kaukonen has been one of the most highly respected interpreters of American roots music, blues, and rock. A member of the Rock & Roll Hall of Fame and a Grammy recipient, Jorma was at the forefront of popular rock and roll, one of the founders of the San Francisco sound and a progenitor of Psychedelic Rock. He is a founding member of two legendary bands, Jefferson Airplane and the still-touring Hot Tuna. Jorma Kaukonen is a music legend and one of the finest singer-songwriters in his field. He continues to tour the world bringing his unique styling to old blues tunes while presenting new songs of weight and dimension. His secret is in playing spontaneous and unfiltered music, with an individual expression of personality. In 2016, Jorma, Jack Casady and the other members of Jefferson Airplane were awarded The GRAMMY Lifetime Achievement Award for their contributions to American music.

“A mesmerizing storyteller, Kaukonen delivers a memoir as intricate and dazzling as his music.” —Publishers Weekly, starred review
In 2019 St. Martin’s Press published Jorma‘s autobiography, Been So Long: My Life and Music, written to express his life both in and out of the music world. As Kaukonen describes, “My story is my story. Having told bits and pieces of it over my lifetime to a treasured few, it was time to tell all to a bigger audience…From rehearsals and jams in small apartments and tiny back rooms to Monterey, Woodstock, Altamont, the Rock And Roll Hall Of Fame, the world of the Grammys and beyond… this is part of the road I live on. This is my embryonic journey and much, much more!”
“At a time when many rock stars are releasing memoirs, Jorma Kaukonen’s Been So Long: My Life and Music stands apart…. an incredibly insightful look inside the life of a musician who was not only influenced by some of America’s greatest music but who also left an indelible mark on that very same musical landscape.” —AXS

The son of a State Department official, Jorma Kaukonen, Jr. was born and raised in the Washington D.C. area, with occasional extended trips outside
the United States. He was a devotee of rock and roll in the Buddy Holly era but soon developed a love for the blues and bluegrass that were profuse in the clubs and concerts in the nation’s capital. It inspired him to take up guitar and play that kind of music himself. Soon he met Jack Casady, the younger brother of a friend and a wonderful guitar player in his own right. Though they could not have known it, they were beginning a musical partnership that has continued for more than 50 years.

Jorma graduated from high school and headed off for Antioch College in Ohio, where he met Ian Buchanan, who introduced him to the elaborate fingerstyle fretwork of the Rev. Gary Davis. A work-study program in New York introduced Jorma, the increasingly skilled guitarist, to that city’s burgeoning folk-blues-bluegrass scene and many of its players. After a break from college and travel overseas, Jorma moved to California, where he returned to classes at Santa Clara University and earned money by teaching guitar. It was at this time, in 1965, that he met Paul Kantner and was invited to join a new not-yet-named rock band Kantner was forming with Marty Balin. As a self-described blues purist, Kaukonen was initially reluctant, but found his imagination excited by the arsenal of effects available to electric guitar, later remarking that he was “sucked in by technology.” With the group still looking for a name, Kaukonen suggested Jefferson Airplane, inspired by an eccentric friend who had given his dog the name “Blind Lemon Jefferson Airplane.” Jorma invited his old musical partner Jack Casady to come out to San Francisco and play electric bass for the new band, and together they created much of Jefferson Airplane’s signature sound.

A pioneer of counterculture-era psychedelic rock, the group was the first band from the San Francisco scene to achieve international mainstream success. Their 1967 record Surrealistic Pillow is regarded as one of the key recordings of the “Summer of Love.”
“Jorma Kaukonen is a force in American music, equally adept at fingerpicked acoustic folk and blues as he is at wailing on an electric.” – Acoustic Guitar
Jorma and Jack would jam whenever they could and would sometimes perform sets within sets at Airplane concerts. The two would often play clubs following Airplane performances. Making a name for themselves as a duo, they struck a record deal, and Hot Tuna was born. Jorma left Jefferson Airplane after the band’s most productive five years, pursuing his full-time

job with Hot Tuna. Over the past five decades Hot Tuna has performed thousands of concerts and released more than two-dozen records. The musicians who have performed with them are many and widely varied, as are their styles — from acoustic to long and loud electric jams, but never straying far from their musical roots. What is remarkable is that they have never coasted. Hot Tuna today sounds better than ever.
“It is Kaukonen’s original material that best tells the story.” – Forbes
Jorma’s originals from his poignant instrumentals, “Embryonic
Journey” (Jefferson Airplane – Surrealistic Pillow) and “The Water
Song” (Hot Tuna – Burgers), to his insightful lyrics, “Genesis” (Jorma Kaukonen – Quah), have stood the test of time. Having an undeniable feeling of significance, they have been included in films and covered by many artists who have been inspired by his depth and continuity of spirit.
“[His] dexterity runs circles around most players … His material stands the test of time in a way that most others will not.” – Billboard
In addition to his work with Hot Tuna, Jorma has recorded more than a dozen solo albums on major labels beginning with 1974’s Quah and continuing with his recent acoustic releases on Red House Records — Stars in My Crown (2007) produced by Byron House, River of Time (2009) produced by Larry Campbell and featuring Levon Helm and Jorma’s latest solo album, Ain’t in No Hurry (2015) also produced by Larry Campbell and featuring Jack Casady.
“Clearly not content on resting on any of his legendary laurels, Jorma Kaukonen continues to find ways to wed his muse to the right material and create a colorful tableau.” – Relix
But performance and recording are only part of the story.
As the leading practitioner and teacher of fingerstyle guitar, Jorma and his wife Vanessa Lillian operate one of the world’s most unique centers for the study of guitar and other instruments. Jorma Kaukonen’s Fur Peace Ranch Guitar Camp is located on 125 acres of fields, woods, hills, and streams in the Appalachian foothills of Southeastern Ohio. Since it opened in 1998, thousands of musicians whose skills range from basic to highly accomplished gather for weekends of master instruction offered by Jorma and other instructors who are leaders in their musical fields. A multitude of

renowned performers make the trek to Ohio to teach at Fur Peace Ranch and play at the performance hall, Fur Peace Station. It has become an important stop on the touring circuit for artists who do not normally play intimate 200-seat venues, bringing such artists as David Bromberg, Roger McGuinn, Arlo Guthrie, Dave Alvin, Ramblin’ Jack Elliott, Warren Haynes, Lee Roy Parnell, Chris Hillman and more. Students, instructors, and visiting artists alike welcome the peace and tranquility — as well as the great music and great instruction — that Fur Peace Ranch offers.
At Fur Peace Ranch the Kaukonens have created the Psylodelic Gallery, a museum in a silo, celebrating the music, art, culture, and literature of the 1960’s, tracing important events and movements of the psychedelic era. They produce concerts at the Fur Peace Station which are
streamed internationally on YouTube as well as broadcast on WOUB 91.3 FM. The Kaukonens there support their local community through art festivals and a restaurant on site.
Jorma Kaukonen is constantly looking to take his musical horizons further still, always moving forward and he is quick to say that teaching is among the most rewarding aspects of his career. “You just can’t go backward. The arrow of time only goes in one direction.”