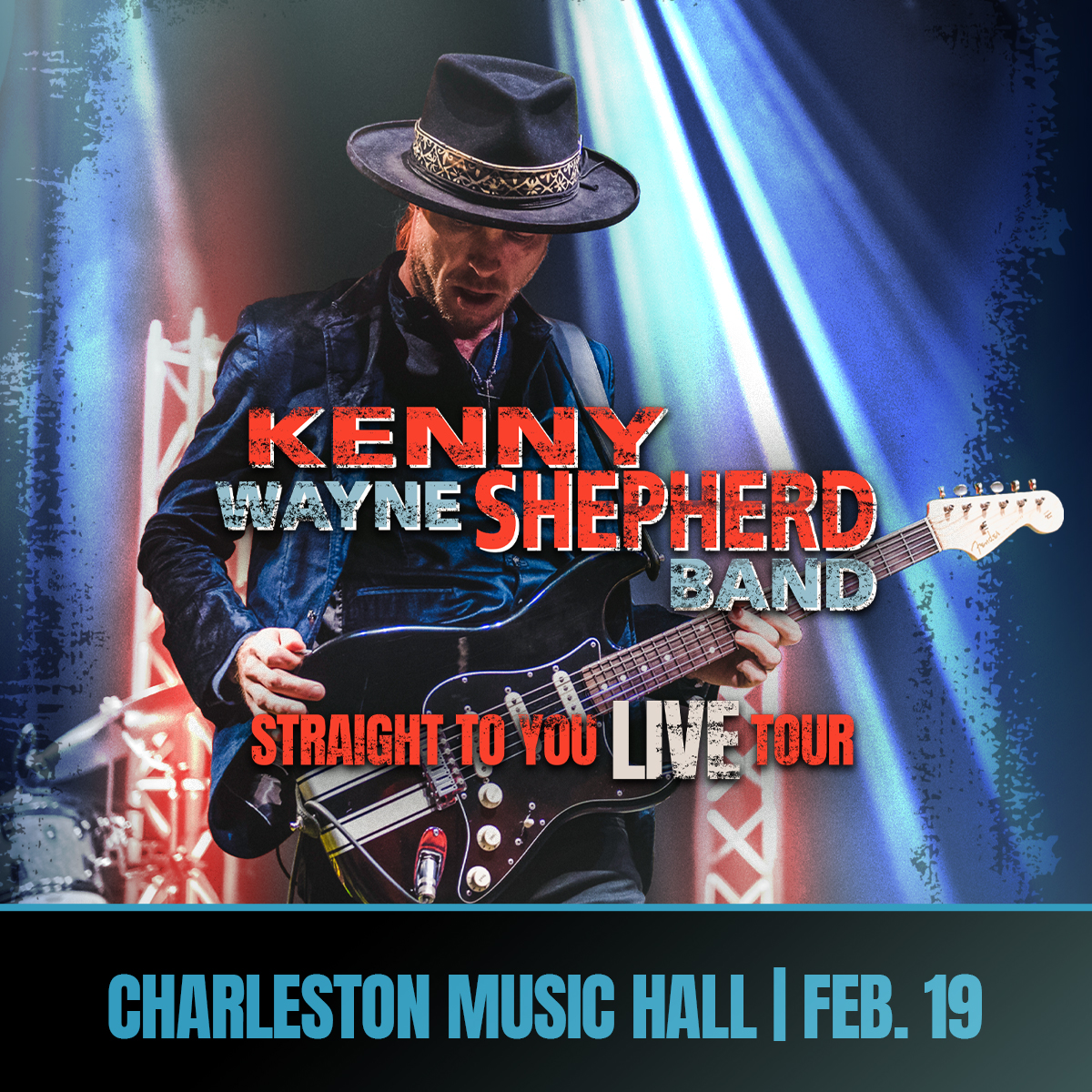 For the last quarter-century, riding shotgun with Kenny Wayne Shepherd has been the greatest road-trip in rock ‘n’ roll. Gone is the young Louisiana gunslinger who erupted onto the early-’90s scene with his burn-it-down guitar solos and gut-punch songcraft. The man he’s become is even more magnetic, still pushing his Fender Strat where others fear to fret, while diving deep into human truths and personal evolution with an honesty that only comes with miles on the clock.   If that quarter-century journey has taught Shepherd anything, it’s that there’s no such thing as mission accomplished.  A restless creativity has driven Shepherd ever since he taught himself to play guitar at the age of 7.  A musician in constant motion, Shepherd has spent his career burning up the highways and crossing continents, bringing his unique style of rock/blues to the world.

Like all the great songwriters, Shepherd’s studio catalogue has always been the best way to get to know the reserved musician. His path was set from childhood, as he copped the licks from the records brought home by his radio DJ/Program Director father and was sent reeling from a “life-changing” meeting with Stevie Ray Vaughan to make his own stage debut at the age of 13. With early albums like his Platinum selling Ledbetter Heights, his Platinum selling Trouble Is…, his Gold selling Live On and The Place You’re In, the blues-rock scene hailed its most honest new songwriter and guitar hero with a plethora of awards including two Billboard Music Awards, two Orville H. Gibson Awards and two Grammy nominations.  Shepherd continued writing, recording and touring, chronicling the highs and hard times, while dousing his shows with guitar pyrotechnics. “The first five years of my career,” he remembers, “I was on tour non-stop. I’d probably go home for two weeks a year.”

The year 2007 brought the ambitious Platinum selling DVD/CD project 10 Days Out: Blues from the Backroads, for which Shepherd received two more Grammy nominations.  In the documentary, he and his band traveled throughout the American South to record with such blues icons as B.B. King, Clarence “Gatemouth” Brown, Hubert Sumlin, Pinetop Perkins and David “Honeyboy” Edwards.  2010 saw the release of Shepherd’s long-awaited first live album, Live! In Chicago, recorded at Chicago’s House of Blues during the all-star Legends tour supporting 10 Days Out. The live disc debuted at #1 on Billboard’s Blues chart, marking the 5th time he had a #1 debut as well as receiving yet another Grammy nomination.

In 2011, the now seasoned performer and songwriter stopped off to release the acclaimed How I Go and in 2013, Shepherd became one-third of blues-rock supergroup The Rides, with legendary veterans Stephen Stills (Crosby, Stills & Nash) and Barry Goldberg (Electric Flag).  The Rides toured extensively, and have released two acclaimed albums, Can’t Get Enough and Pierced Arrow, that further illuminate Shepherd’s depth and proficiency as a songwriter, guitar player and now vocalist.

In 2014, the rocket-fueled collaboration covers album, Goin’ Home was introduced and 2017 saw the release of Lay It On Down which was followed by 2019’s The Traveler, which reaches across the battle lines of a planet that has never been so divided and showcases Shepherd’s ever-evolving songwriting. The Traveler also marked the 8th time Shephed had a release debut at #1 on the Billboard Blues charts.

In an industry that’s changed drastically over the years, Shepherd’s versatility and drive has served him well.  He plans to keep making music and to keep touring, “I don’t have any intention of sitting idly. We’re a live band, and when people listen to our records, I want them to hear what we sound like when we play live.  I just want to keep moving and keep creating and keep doing what I love – for as long as I possibly can…”

This is no time for faint hearts. The pandemic might have silenced the music scene, shuttered the live circuit and divided artists from their fans. But with Heart Of Fire, Texas’s favorite new gunslinger Ally Venable is coming off the ropes swinging. Defying dark times and rolling up the amps, this fourth release from the acclaimed singer-songwriter is a record to rattle your speakers and signpost better times ahead. “My vision was to really spread a positive message of love,” says Venable. “The world needs that right now.”

If Heart Of Fire finds Venable giving the globe some much-needed love, then the feeling is entirely mutual. Still in her early twenties, the guitarist’s breakneck two decades have moved as fast as her fingers, her path winding from childhood church choirs to the teenage influence of local heroes like Stevie Ray Vaughan and Miranda Lambert. Early releases No Glass Shoes (2016) and Puppet Show (2018) earned her international fans, Top 10 chart placings and ETX Awards, but it was 2019’s #2 Billboard-charting Texas Honey and house-rocking sets on that year’s Blues Caravan tour that sent her stratospheric. Now, with Venable’s fanbase snaking further around the block every time she blows into town, Texas roots icon and Texas Honey producer Mike Zito is in no doubt: “Ally is the future of blues and the crossover music of American roots-rock.”

Not even a global pandemic could derail her momentum. Working at the Bessie Blue Studio in Stantonville, Tennessee last February with world-renowned producer Jim Gaines, Heart Of Fire finds Venable laser-focused on her songcraft, challenging herself to write with unguarded honesty, even if it hurts. “On this album, I really wanted to create a tone of overcoming your struggles and persevering through them,” she explains.

Like any battle, this record gets loud. Anyone who has left an Ally Venable show with ringing ears will come expecting rip-it-up guitar work, and Heart Of Fire is a lovely way to burn. In a world of electronic pop, this old-soul gunslinger riffs up a storm on the Led Zeppelin-worthy sting of Hard Change and Do It In Heels, revs up the slinky hook of Sad Situation and drives the title track’s intro with a heavy-booted wah lick. “That song is about being in a state of sadness,” she explains, “and someone comes along and brings you out of it, and then nobody is able to take out your flame.”

Guest Kenny Wayne Shepherd, tears up Bring On The Pain. As Venable says: “That song is about loving someone, staying true to yourself during the bad times and saying, ‘No matter what’s going on, my love won’t change’. Kenny is one of my heroes, so I’m very honored he said yes to be a part of the song.”

While nobody is better at squeezing fresh juice from the blues-rock genre, Venable’s songwriting frequently forks into leftfield. There’s the chain-gang stomp of Hateful Blues, its lyric cursing a cruel lover (‘Oh, my love has been abused/and that’s why I’ve got these hateful blues’). There’s the pace-changing cover of Bill Withers’ classic Use Me, reborn here with congas, rubber band bass and a grooving lick. And don’t miss the impossibly wistful Road To Nowhere, with Southern rock great Devon Allman dovetailing with Venable on the chorus harmonies. “Devon jumped right into the song, elevated it and brought it to life,” she remembers. “His vision for the song aligned perfectly with mine, and I’m so happy with how it turned out.”
The same could be said for Heart Of Fire. Defiant, passionate, honest and raw, this is the record these times demand, from an artist who refuses to wait for the storm to pass, but prefers to dance in the rain. “My goal for this album was to give an outlet for people,” Venable considers. “That’s really where the core of these songs comes from…”