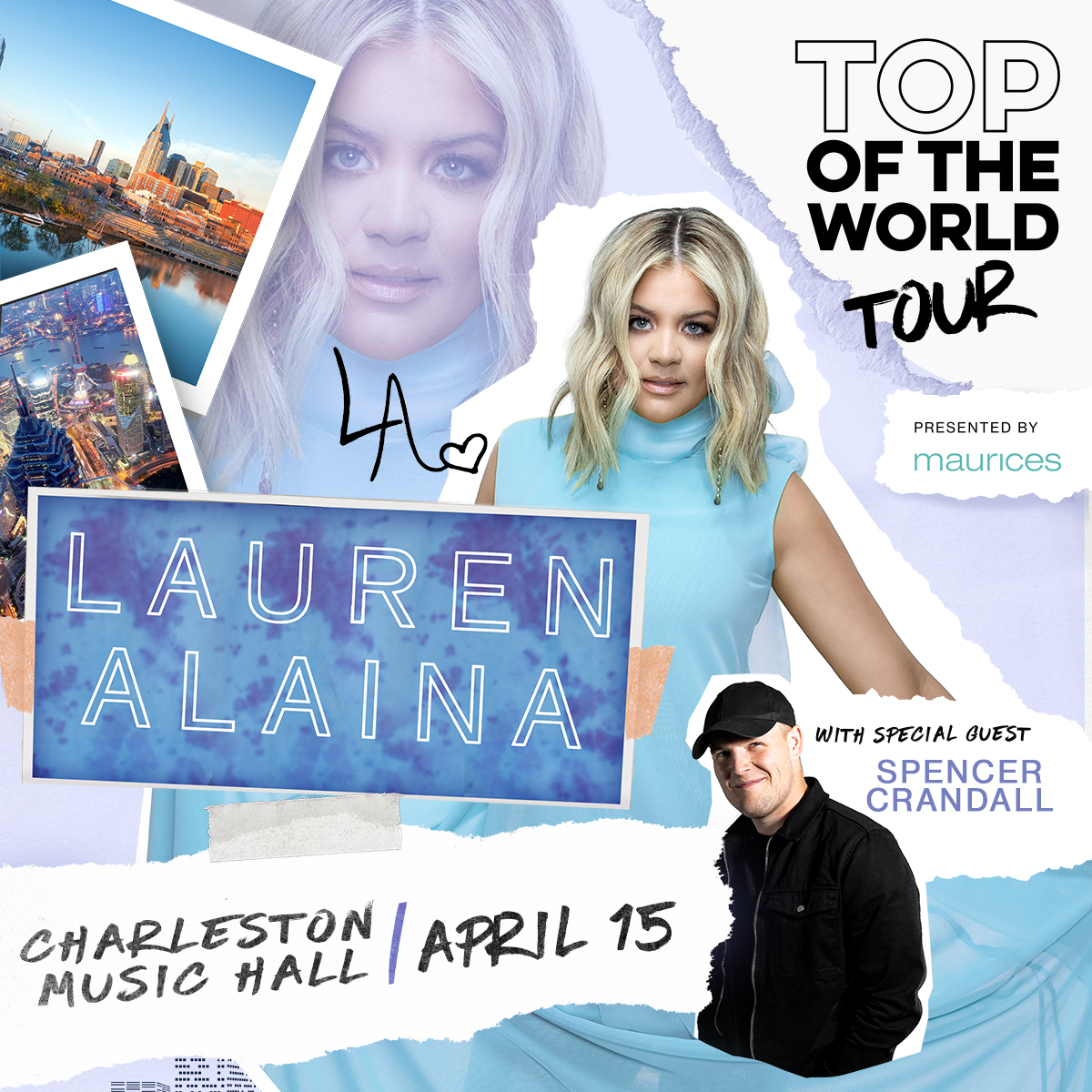 Ten years into her Nashville career, Lauren Alaina is in the upper echelon of country music’s most authentic voices, beloved personalities, and open hearts. She’s earned a reputation as one of the genre’s most compelling storytellers by boldly incorporating her struggles and heartache into her critically acclaimed first two albums. Lauren’s third studio collection, Sitting Pretty on Top of the World, is an artful evolution of immaculately penned, unflinching reflections of the mountains and valleys on her journey.

Sitting Pretty on Top of the World opens with the telltale sound of a needle dropping down on a record, and with that, Lauren sets the tone for some of the most captivating music of her career. Lauren was inspired to lean into the tenets of classic country music for this project and on the albums lead track, “It Was Me,” she offers a timeless country ballad filled with heartsick self-reflection.Lauren’s voice emotionally soars through the aching, introspective lyrics: “It wasn’t you I didn’t love, it was me.”

“The other person isn’t always the bad guy,”Lauren concedes. “On ‘It Was Me,’ I’m taking full ownership of being in the wrong. It was really hard to admit that I was the one at fault and to realize that I didn’t love myself enough to allow someone else to love me.”But the vulnerable“It Was Me,” co-written with Hillary Lindsey, is a song Lauren considers to be one of the best she’s ever written.

Lauren takes pride in the exposed transparency of her songwriting on this project, and though most writing sessions took place via Zoom, Lauren was crafting verses and choruses alongside the likes of award-winning songwriters includingLiz Rose, Lori McKenna, Hillary Lindsey, Emily Weisband, David Garcia, Jordan Reynolds, Ben Johnson and Kennedi Lykken. She co-wrote 14 of the album’s 15 songs, much of it inspired from recent life experiences including two impactful break-ups, the loss of her stepfather, and like much of the world, Lauren struggled with despondency as she adapted to life in the pandemic.

The album’s title track “On Top of the World” delves into the dark reality behind polished facades.Writing the song with JordanReynolds and Sasha Sloan after the pandemic forced her to stay home for the first time in a decade, Lauren, in a heightened emotional state, revealed how she felt enveloped in loneliness and sadness.

“I’ve been on the road and touring for 10years and having that taken away so suddenly felt like an abrupt stop to everything I’ve been working for, and that was a really scary thing for me,” she says, “but the whole world stopped for everybody ,and I needed to find new ways to connect with people.”

Lauren applies that same honest vulnerability throughout the album from the harrowing ballad “What Do You Think Of?” featuring Danish Pop Star Lukas Graham, to the pensive flow of “I’m Not Sad Anymore,”to the beautiful simplicity of “Good Ole Boy”with its scaled back production that truly allows Lauren’s vocals to shine.

“This whole thing [album] is about loving yourself and being brave and being strong,” Lauren says. “I was faced with all these trials, and I hope people feel themselves in these songs. I think we all live the same stories with different characters. And maybe people realize new beginnings can be good.”

“Getting Good,” a duet with Trisha Yearwood, is the only song Lauren didn’t write on the album. Penned by Weisband, the song is a poignant truth-telling about choosing to be happy. Drawn to the concept, Lauren says, “Life is all about perspective, and you sometimes you have to shift your perspective.”

Lauren punctuates the lovelorn with the playful yet forthright “When the Party’s Over” and with the propulsive yet nostalgic “Run.” She also teamed up with Emily Weisband and the album’s producer Paul DiGiovanni to write the lighthearted, here-for-the-fun, rebound tune, “Getting Over Him,” featuring country star Jon Pardi. Lauren rounds out the album with the beautifully hopeful “Change My Mind,” which she co-wrote with Seth Ennis and Cameron Bedell.

Then with the familiar crackle of a vinyl record nearing its end, the album comes to a close. A journey from start to finish. Lauren explores life in these unique times andSitting Pretty on Top of the World is the salve and the soundtrack for anyone traversing their own personal quest for hope and new beginnings.

Denver-native Spencer Crandall is an independent country music singer/songwriter and entertainer. His sound continues to push the envelope—a blend of country storytelling with non-traditional production elements—reflecting influences ranging from Ed Sheeran and Taylor Swift to Justin Timberlake and Drake.

Raised in a music-loving family, Crandall grew up attending summer country concerts with dreams of being an entertainer, idolizing touring sensations like Kenny Chesney and Keith Urban. For a senior project in high school, Crandall decided to pick up the guitar and learn to play. The next year he headed to Grand Junction to play college football, until facing a career-ending shoulder injury. With the spare time on his hands during recovery, Spencer began to sing and write music, ultimately growing a steady following on social media by posting videos of dorm room performances of his original music.

After frequent trips to Nashville throughout 2016, Crandall decided it was time to make the move to Music City and seriously pursue his music career. Since then, Crandall has gained over 2M followers and 22M likes on TikTok and has shared the stage with artists including Chris Lane, Dustin Lynch, Tyler Rich and Josh Turner.

In four short years, Crandall has amassed over 115M streams across all platforms as an independent artist, with two album releases debuting at No.1 on the iTunes country charts. His song My Person has over 40 million streams and is currently in the top 10 on Sirius XMs Hot 30 Weekend Countdown. His latest single ‘Made’ has gained over 3 million streams in 5 short weeks, debuting at #2 All-genre on the iTunes charts and #4 on Billboard’s Country Digital Sales Chart. With plans for another full length album in 2022 and exciting touring opportunities, it plans to be his most exciting year to date.