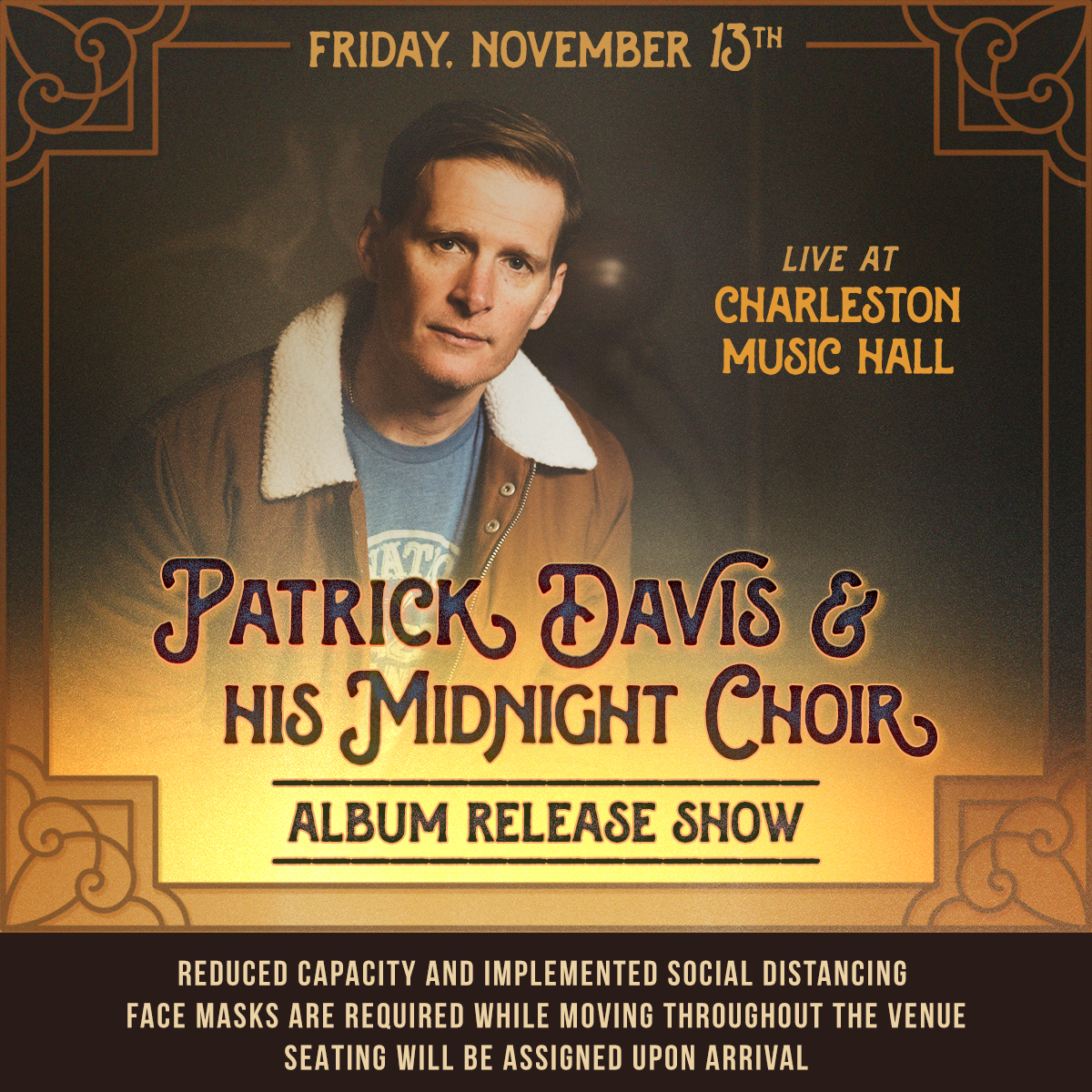 For over a decade, Patrick Davis has made a name for himself as a prolific and versatile songwriter, sought after by artists ranging from Guy Clark and Robert Randolph to Jimmy Buffett and Imelda May. As frontman of Patrick Davis & His Midnight Choir, Davis has discovered his own personally authentic sound.

Tennessee-born, South Carolina-raised and Nashville-based, Davis received his calling in his teenage years, inheriting his talent from his father, Rusty Davis, a gifted guitar player and instructor. Davis picked up his craft quickly, becoming a deft and intuitive guitar player and writing his first fully developed songs at age 17. He was first driven to put pen to paper by the same motivation as many of his musical heroes: to win a girl’s affection. Recognizing untapped potential, his friend and musical collaborator Mark Bryan (Hootie & the Blowfish) advised Davis to move to Nashville and his songwriting career took off.

As the COVID-19 pandemic caused global social and economic disruption, Davis found himself at a creative crossroads. In search of a way to continue to deliver music to his fans while at the same time desperate for relief from the world’s uncertainty, Davis did what he does best – he picked up his guitar. From there, Couch Covers was born.

The project, which started as nightly live stream of Davis playing a cover song he often learned that morning, has evolved into a masterpiece. After receiving an incredibly strong social media response, Davis went from the couch to the studio to record the songs for a full album. The Couch Covers album will be released everywhere on December 4, 2021 and includes covers of “Pink Moon” by Nick Drake, “Rocket Man” by Elton John, and “Imagine” by John Lennon.

Davis has continued to focus on writing, recording and performing songs he completely believes in with songwriters and musicians he feels possessed the same appreciation for their art and craftsmanship as himself.  From this desire, Davis’ touring outfit, Patrick Davis & His Midnight Choir, was created. The eleven-piece band frequently welcomes cameos from world-class musicians, but maintains the distinct family atmosphere that makes the band special. Davis’ father, Rusty, occasionally brings his impressive guitar skills and his sister, Megan, can often be spotted singing backup vocals. In 2021, Davis will be releasing a studio album that will focus on the songwriting and musical landscape he has worked to create on the road with his Midnight Choir.

Davis is also founder of Songwriters In Paradise (SIP), a uniquely crafted singer- songwriter festival designed to bring together the world’s top songwriting and performing talent in the world’s most exclusive and awe-inspiring destinations for a priceless musical experience, such as Hope Town, Bahamas; Napa Valley, California; and Cabo San Lucas, Mexico.

When Hurricane Dorian hit the Abaco Islands in September 2019, Davis quickly launched #Hope4HopeTown to help provide much needed relief and aid to his friends on the island. Through a star-studded concert, SIP Hope 4 Hope Town at the Ryman, as well as generous donations, the effort raised 1 million dollars. While the pandemic has forced many SIP events to be postponed, Patrick and the SIP family plan to return to Cabo for a small event in December 2020 and Napa Valley for SIP NAPA in April 2021.

In addition to his musical endeavors, Patrick is co-founder of Whiskey Jam Whiskey with South Carolina’s world-renowned, Firefly Distillery.

The City of Charleston’s ordinance requires patrons to wear a face mask. Please be respectful to the ordinance and other patrons. Although the Charleston Music Hall follows CDC guidelines for disinfection, they cannot guarantee you will not be exposed to COVID-19. By entering the venue premises, visitors accept all responsibility for medical risk associated with their presence in a public place for themselves and for those for whom they act as legal guardian. The Charleston Music Hall is not liable for illness or injury beyond what may be prevented through reasonable accommodations. Please follow the city ordinance on masks, avoid touching surfaces, wash your hands or use hand sanitizers frequently, and please follow all signage posted to provide you with a safe experience. 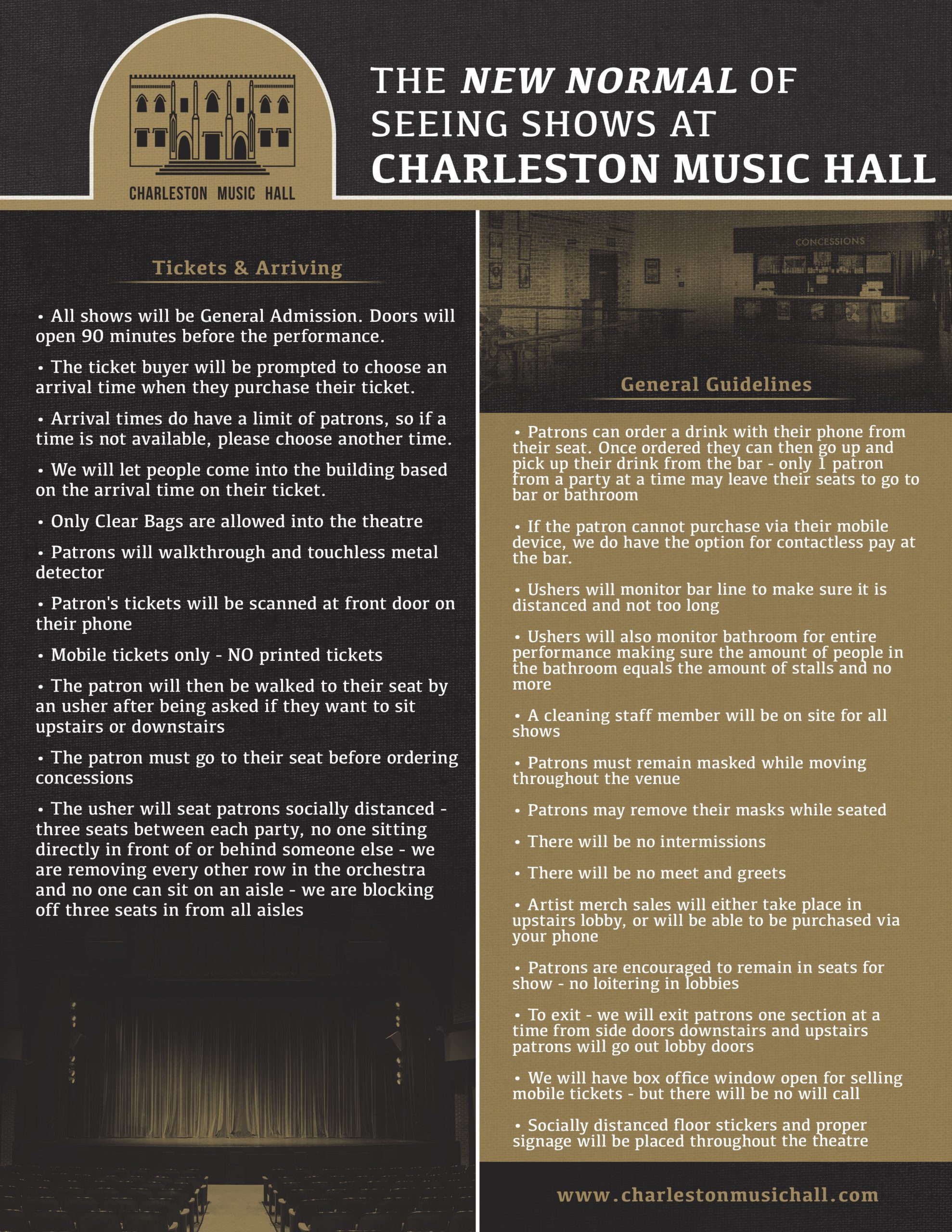