The Struts: Across The Pond Tour 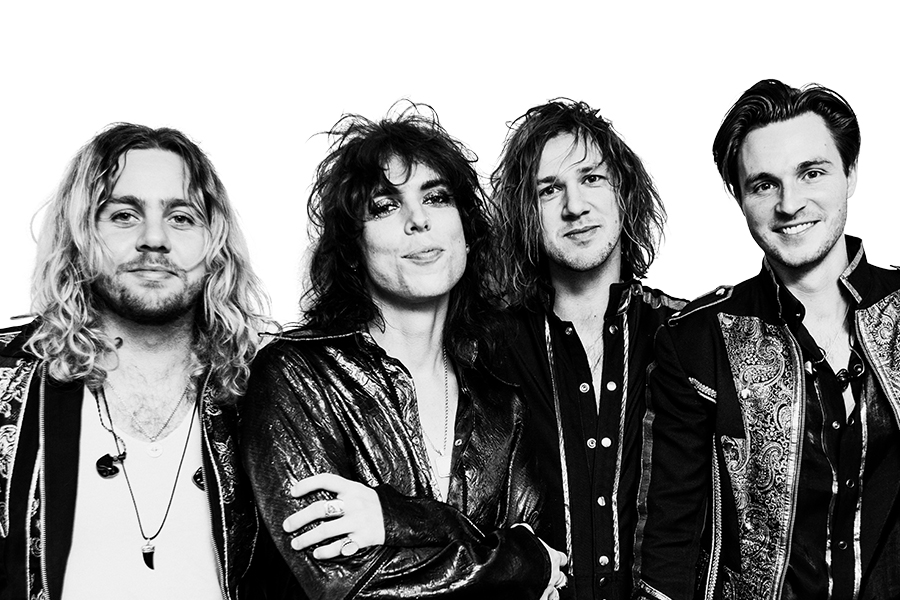 The third full-length from British rock band The Struts, Strange Days came to life over the course of a charmed and frenzied burst of creativity last spring. After getting tested for COVID-19, singer Luke Spiller, guitarist Adam Slack, bassist Jed Elliott, and drummer Gethin Davies all moved into the Los Angeles home of Jon Levine, a producer who worked extensively on their acclaimed sophomore effort YOUNG & DANGEROUS (including the album’s chart-climbing lead single “Body Talks”). Within just ten days of couch-crashing at Levine’s house, The Struts had laid down nine original tracks and one masterful cover of a KISS B-side: a lean, mean body of work that amounts to their most glorious output to date.

“It was so much fun to make a record this way instead of getting everything done in between touring, working with multiple producers in multiple countries,” says Spiller. “We were all just burning to capture that excitement as much as we possibly could, and at times it felt like the songs were literally just falling from the sky.”

In an organic turn of events for a band massively embraced by some of rock-and-roll history’s greatest icons—a feat that’s included opening for The Rolling Stones, The Who, and Guns N’ Roses—Strange Days finds The Struts joining forces with a formidable lineup of guest musicians: Def Leppard’s Joe Elliott and Phil Collen, Albert Hammond Jr. of The Strokes, Tom Morello, and Robbie Williams. Mixed by Claudius Mittendorfer (Panic! At the Disco, Arctic Monkeys, Johnny Marr), the result is a powerhouse album that lifts The Struts’ glammed-up breed of modern rock to entirely new and wildly thrilling heights.

Kicking off with a magnificent bang, Strange Days opens on its title track, a sprawling and string-laced duet with Robbie Williams. “I was doing Quarantine Radio and Robbie hit me up out of the blue asking if we could talk,” notes Spiller, referring to the Instagram Live show launched by The Struts in the early days of lockdown. “We ended up Face-Timing for about two hours the first time we’d ever spoken, talking about life and music and UFOs and everything else you can think of. I asked if he’d like to work together at some point, and while we were making the album he graciously let us come over and record him singing on his front porch.” Despite its prescient title, “Strange Days” took shape from a voice memo Spiller recorded on the band’s tour bus way back in summer 2019. Fused with a cabaret-inspired interlude Spiller had recently dreamed up, the song ultimately evolved into the perfect vessel for the frontman’s force-of-nature voice: a tenderhearted epic that offers incredible solace in the most chaotic of times.

Sparked from a Britpop-leaning riff brought in by Slack, the album’s potent lead single “Another Hit of Showmanship” feat. Albert Hammond Jr. centers on another poignant vocal performance from Spiller, who deftly channels the tension between giving in to temptation and rising above your demons. After laying down the initial version of the track, Spiller reached out to Hammond, for whom the band opened on a series of 2018 solo shows. “‘Another Hit of Showmanship’ reminds me of being at a club night called Ramshackle years ago at the O2 Academy in Bristol, where they’d play bands like The Libertines and Razorlight and Scissor Sisters, and of course The Strokes,” says Spiller. “I hit up Albert out of the blue and told him, ‘We’ve got this song, and I’m so excited to see what you would do with it.’ As soon as he got his hands on it, he took it to a whole different level—it really just shows why he’s so brilliant at what he does.”

The most groovy-heavy work yet from The Struts, Strange Days also delivers hip-shaking standouts like “I Hate How Much I Want You”: a hot-and-bothered stomper graced with a scorching guitar solo from Phil Collen and Joe Elliott’s high-voltage vocals. Another explosive moment, “All Dressed Up (With Nowhere To Go)” unfolds in snarling power chords and exquisitely cheeky lyrics (its opening salvo: “You look like a movie star/On Sunday morning”). “That one’s based around the idea of being in love with your motorcycle—there’s a bit of innuendo to it,” says Spiller, whose own bike inspired the track. “The whole concept of being all dressed up with nowhere to go seems especially relevant the moment.” Meanwhile, “Wild Child” makes for a fierce and filthy anthem, infinitely supercharged by Tom Morello’s blistering guitar work. And on the beautifully weary “Burn It Down,” The Struts slip into a bittersweet mood, serving up a slow-burning ballad that sounds straight from the sessions for Exile on Main St.

The sole cover song on Strange Days, “Do You Love Me” finds The Struts updating a fantastically sleazy track first recorded by KISS in 1976 and remade in 1980 by Girl (a late-’70s/early-’80s British glam-metal band that, incidentally, featured Phil Collen on guitar). “I was so in love with Girl’s version of ‘Do You Love Me’ and thought the simplicity of it was amazing,” says Spiller. “I wanted to give it an even bigger sound for our album—something way more aggressive, completely balls-to-the-wall.”

In their supreme handling of “Do You Love Me,” The Struts again claim their rightful place in the lineage of rock-and-roll hellraisers. Formed in Derby, England, in 2012, the band quickly drew a major following with their outrageous live show, and later made their debut with Have You Heard (a 2015 EP whose lead single “Could Have Been Me” hit #1 on Spotify’s viral chart). Before they’d even put out their first album, the band opened for The Rolling Stones before a crowd of 80,000 in Paris and toured the U.S. on a string of sold-out shows. With their full-length debut Everybody Wants arriving in 2016, The Struts released YOUNG & DANGEROUS in 2018, soon after wrapping up a North American tour with Foo Fighters. Having toured incessantly since their formation, The Struts have also taken the stage at many the world’s biggest music festivals, including Lollapalooza, Governors Ball, Isle of Wight, and many more.

As Spiller reveals, the making of Strange Days was a period of joyful productivity. “Every day I’d wake up at about 7 a.m., get three venti Americanos delivered to the house, go out to the backyard and smoke a couple of spliffs, and listen to the voice memos I’d recorded at the sessions the day before,” he recalls. “After the first four days or so we hit a bit of a wall, so we decided to get some beers in and just stay in the pool all day—and the day after that we knocked out three whole songs.” Throughout Strange Days, that kinetic energy manifests in the album’s unbridled spirit, an element that makes every track exhilarating. “I think because we’d wanted to make an album this way for years, all that excitement and hunger led to an immediate sort of magic once we started working on it,” says Spiller. “It was undoubtedly a magical ten days for us—and I hope when people hear the album, it gives them a taste of that magic too.”

Nick Perri & The Underground Thieves are a rock band from Philadelphia PA led by artist, songwriter, and producer Nick Perri.

“The band mix sweet harmonies and vocals, scorching guitar work, and a solid rhythm section. This is more than just a group of friends or gathering of musicians, this is like a family.” -Patchchord News

The group consists of Perri on lead vocals and guitar, bassist Brian Weaver, keyboardist Justin DiFebbo, and drummer Zil Fessler, all of whom originate from Philadelphia, Pennsylvania.

“Feeling Good”, the band’s first single hit #45 on US rock radio charts recently and earned acclaim from industry contemporaries as well as fans from all over the world.

The band’s first full-length LP “SUN VIA” debuted at #6 on the iTunes rock charts and is available now on Vinyl, CD, and all digital platforms. For more information visit: https://www.nickperrimusic.com