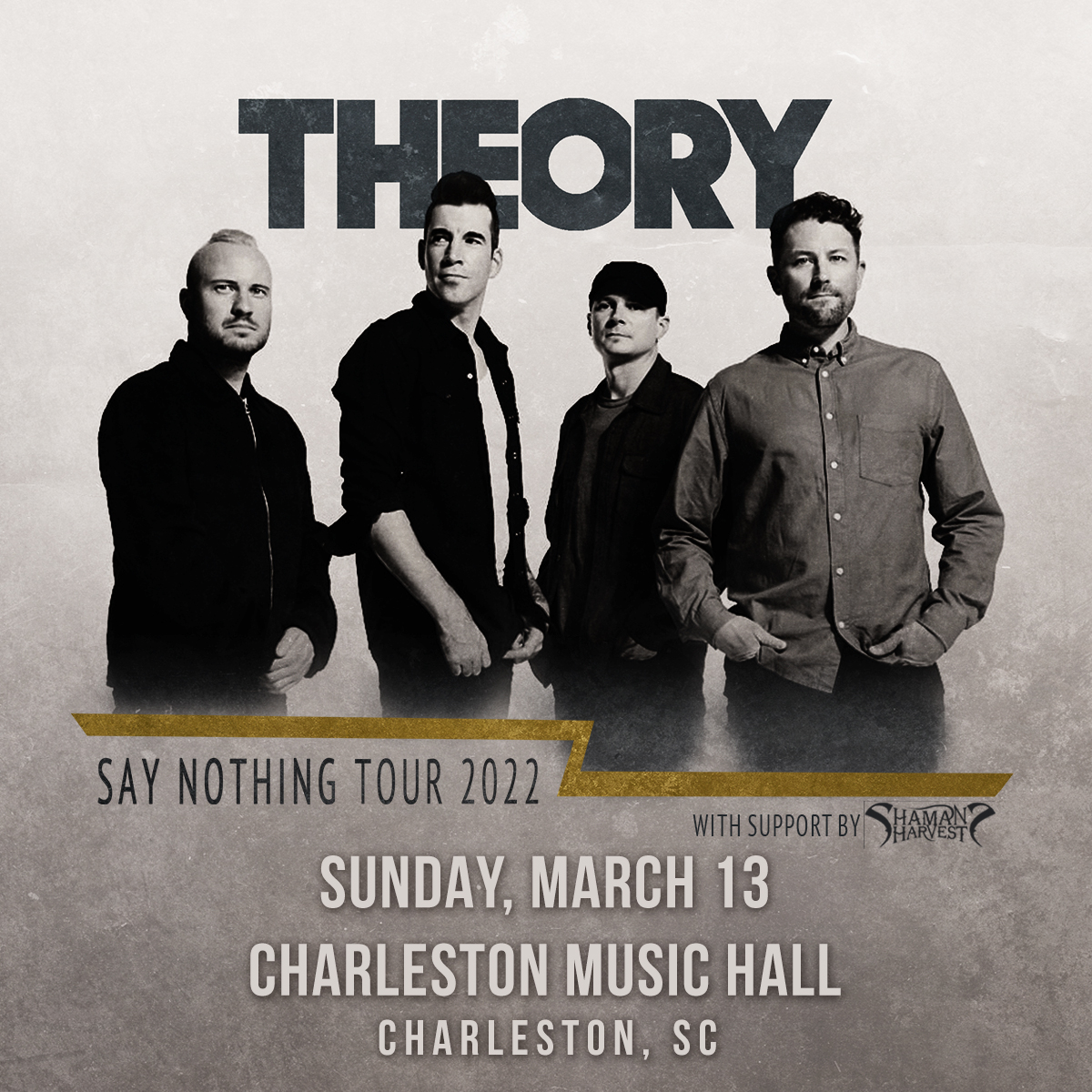 About Theory of a Deadman:

Theory consistently delivers undeniable anthems rooted in scorching songcraft, experimental vision, rock‘n’ roll attitude, and clever pop ambition. As a result, the award-winning multi platinum Los Angeles-based Canadian band—Tyler Connolly [lead vocals, guitar], Dave Brenner [guitar, backing vocals], DeanBack [bass], and Joey Dandeneau [drums]—continue to captivate nearly two decades since their formation. Following a string of successes, the musicians landed their biggest career hit in the form of“Rx (Medicate)” from 2017’s Wake Up Call. Not only did it receive a platinum plaque, generate 100 million-plus streams, and become their third number one on the Billboard Hot Mainstream Rock Tracks chart, but it also received a nomination in the category of“Rock Song of the Year” at the iHeartRadioMusic Awards.The group quietly reached this high watermark by remaining prolific. To date, their discography encompassed the double-platinum single “Bad Girlfriend,” platinum single “Not Meant To Be,” platinum album Scars & Souvenirs, and gold singles “Angel” and “Hate My Life.” Plus, they notched two Top 10 debuts on the Billboard Top 200, namely Truth Is…[2011] and Savages [2014], as well as eight top ten on Billboard Hot Mainstream Rock Tracks Chart. In addition to selling out shows worldwide, they’ve toured with everyone from Alter Bridge and Bush to Stone Sour and Big Wreck and more. Now, Theory’s seventh full-length offering,Say Nothing [Roadrunner Records/Atlantic Worldwide] marks the start of a bold new chapter with their most incisive and irresistible tunes yet introduced by the 2019 single “History Of Violence” and more on the horizon.

The storyline seems obvious: The Missouri hard-rockers assembled this project during a global pandemic that debilitated the entire music industry. “Hard” has kinda been universal lately. But the road to Rebelator was even rockier than the band expected: natural disasters, logistical nightmares, an extreme case of collective writer’s block. “We struggled the whole way,” Hunt adds with a gruff baritone chuckle. “It was an interesting process for sure.”

Every creative step seemed to be hampered by an outside distraction—or even act of God.

“A tornado ripped through our town, 2 miles from our studio, leveling everything in its path” recalls guitarist Josh Hamler.  “Luckily, no one was killed.  Everything can be rebuilt, but we completely lost our creative vibe following the tragic event”.

“There was so much stop and go,” adds Hunt. “There was a flood. We’d have something scheduled, so we’d focus and be locked down for like a month at a time. Then somebody would have to go home, and it would be three weeks later before we’d start up again.”

“Or we’d run out of money,” Hamler adds with a laugh. “It was like Murphy’s law at one point—like, Jesus, what else is going to go wrong in the making of this record?”

Luckily, they had time on their side. After a couple grueling years of touring behind their last album, 2017’s Red Hands Black Deeds—a stretch that included numerous major rock festivals and runs opening for Nickelback and Seether—Shaman’s Harvest were creatively and personally drained. “You try writing on the road, maybe go to the back of the bus and come up with an idea,” Hunt says. “But it’s hard to be inspired when you’re tired. We were like, ‘Let’s just take the time off we need to make the record.’ We didn’t want to half-ass it.”

So founding members Hunt and Hamler, along with guitarist Derrick Shipp and drummer Adam Zemanek—hit the reset button hard, clearing out six months for demo construction at their Jefferson City rehearsal space. This meticulousness marked a distinct change from their usual methodology—instead of slapping together outlines before entering the studio, they treated their first takes with a new level of sensitivity, fleshing out the pieces until they knew them intimately.

“We usually have a really rough idea going into the studio—maybe it’s a verse, maybe it’s a thought,” Hunt says. “But we just write it on the fly and try to catch the magic. This time we wanted to approach it with some intention. We saw the demos all the way though, and that took a good, long pieces of time.”

The process was fairly haphazard at first, as the band tried to regain their footing. With everyone on-hand (the non-Missouri residents were staying in the space itself), they’d all wake up and try to churn up ideas—though it was slow going for a bit. “We’d just sit there and noodle until the spark [was lit],” the frontman admits. “The first songs—some of them made the record, and some of them didn’t. Some of the stuff wasn’t up to par. We were sending stuff back and forth to the label, like, ‘What do you think of this?’ Just going from tour mode to creative mode, I had quite the block. I know everybody was like, ‘I don’t have anything.’ Then it just erupted.”