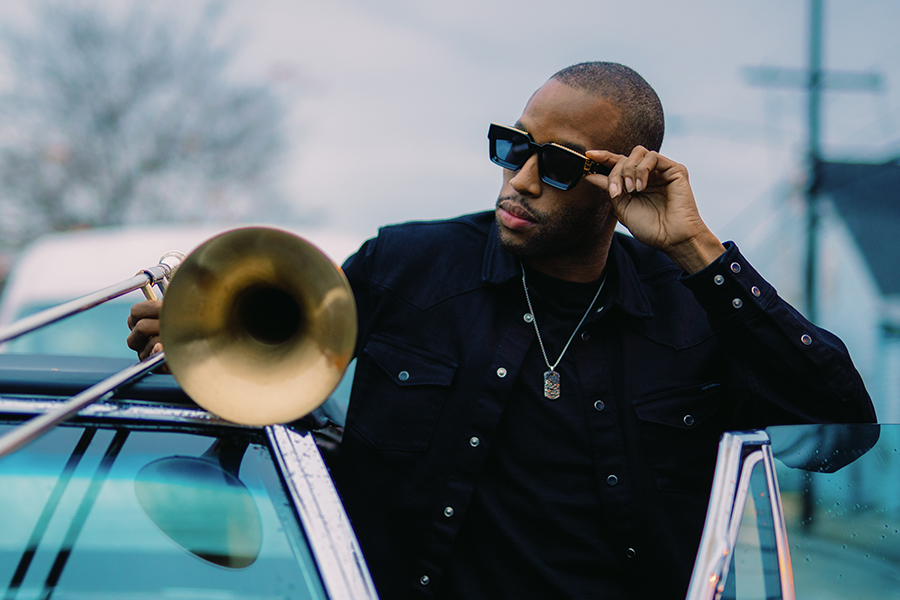 It was after midnight when Trombone Shorty stepped offstage at the House of Blues in New Orleans, but he wasn’t done playing yet. Not by a long shot.

“I had an idea for a new song right after the show,” says Shorty, “so the band and I decided to go straight into the studio and record it that night. We were still sweaty and buzzing from the energy of the gig, and we definitely carried that vibe into the session with us.”

Take a listen to Lifted, Trombone Shorty’s second release for Blue Note Records, and you’ll hear that same ecstatic energy coursing through the entire collection. Recorded at Shorty’s own Buckjump Studio with producer Chris Seefried (Fitz and the Tantrums, Andra Day), the album finds the GRAMMY-nominated NOLA icon and his bandmates tapping into the raw power and exhilarating grooves of their legendary live show, channeling it all into a series of tight, explosive performances that blur the lines between funk, soul, R&B, and psychedelic rock. The writing is bold and self-assured, standing up to hard times and loss with grit and determination, and the playing is muscular to match, mixing pop gleam with hip-hop swagger and second line abandon. Wild as all that may sound, Lifted is still the work of a master craftsman, and the album’s nimble arrangements and judicious use of special guests—from Gary Clark Jr. and Lauren Daigle to the rhythm section from Shorty’s high school marching band—ultimately yields a collection that’s as refined as it is rapturous, one that balances technical virtuosity and emotional release in equal measure as it celebrates music’s primal power to bring us all together.

“I think this is the closest we’ve ever gotten to bottling up the live show and putting it on a record,” says Shorty, whose audiences have grown exponentially in recent years. “Normally when I’m in the studio, I’m trying to make the cleanest thing I can, but this time around, I told everybody to really cut loose, to perform like they were onstage at a festival.”

If anybody knows their way around a festival, it’s Trombone Shorty. Born Troy Andrews, he got his start (and nickname) earlier than most: at four, he made his first appearance at Jazz Fest performing with Bo Diddley; at six, he was leading his own brass band; and by his teenage years, he was hired by Lenny Kravitz to join the band he assembled for his Electric Church World Tour. Shorty’s proven he’s more than just a horn player, though. Catch a gig, open the pages of the New York Times or Vanity Fair, flip on any late-night TV show and you’ll see an undeniable star with utterly magnetic charisma, a natural born showman who can command an audience with the best of them. Since 2010, he’s released four chart topping studio albums; toured with everyone from Jeff Beck to the Red Hot Chili Peppers; collaborated across genres with Pharrell, Bruno Mars, Mark Ronson, Foo Fighters, ZHU, Zac Brown, Normani, Ringo Starr, and countless more; played Coachella, Bonnaroo, Lollapalooza, Newport Folk, Newport Jazz, and nearly every other major festival; performed four times at the GRAMMY Awards, five times at the White House, on dozens of TV shows, and at the star-studded Sesame Street Gala, where he was honored with his own Muppet; launched the Trombone Shorty Foundation to support youth music education; and received the prestigious Caldecott Honor for his first children’s book. Meanwhile in New Orleans, Shorty now leads his own Mardi Gras parade atop a giant float crafted in his likeness, hosts the annual Voodoo Threauxdown shows that have drawn guests including Usher, Nick Jonas, Dierks Bentley, Andra Day, and Leon Bridges to sit in with his band, and has taken over the New Orleans Jazz & Heritage Festival’s hallowed final set, which has seen him closing out the internationally renowned gathering after performances by the likes of Neil Young, the Black Keys, and Kings of Leon.

“I owe all that to my mother,” says Shorty. “She passed recently, but she continued to inspire me right up until she transitioned, and that’s why I put a picture of her holding me up at a second line on the cover of this album. She lifted me up my whole life.”

As if his New Orleans roots weren’t already deep enough, Shorty decided to take over a recording studio in the Lower Garden District after the release of his latest album, 2017’s Seefried-produced Parking Lot Symphony. Dubbing the space Buckjump in a nod to the second lines he grew up playing in, Shortly immediately set about converting the studio into a freewheeling sonic laboratory, one where he and his friends could push themselves creatively without any artistic or commercial restraints.

“Having my own studio meant that the band and I could capture stuff in the moment any time we were feeling inspired,” says Shorty. “It meant that we could take chances and experiment. I could call the guys up with an idea in the middle of the night and they’d say, ‘We’ll meet you there in an hour!’”

That sense of excitement and liberation is palpable on Lifted, which opens with the addictive “Come Back.” Fueled by a bottom-heavy rhythm section, buoyant keys, and bright flashes of brass, the track pairs a hip-hop groove with hard rock energy as Shorty delivers silky smooth vocals that float effortlessly above the instrumental fray. As its title might suggest, the song is a reckoning with loss and regret, but like much of the album, it refuses to surrender to disappointment, keeping its chin held high as it presses forward and fights for what it wants. The effervescent “What It Takes” gets profoundly funky as it celebrates the strength and growth that can emerge from times of struggle, while the bittersweet “Forgiveness” leans into the band’s R&B side as it works to move on from pain and betrayal, and the blistering “I’m Standing Here” (which features a mind-bending guitar solo from Gary Clark Jr.) rushes headlong into the maelstrom.

“I grew up watching wrestling as a kid,” Shorty says with a laugh, “and I if I was a wrestler, ‘I’m Standing Here’ would be the song they played when I came into the ring. It’s all about standing tall no matter what life throws at you.”

Shorty makes sure to celebrate the good times on the album, too, reveling in the joy of love and friendship and family throughout. The spirited “Might Not Make It Home” commits to letting go and living in the moment; the playful “Miss Beautiful” embraces the thrill of desire while offering a twist on the second line tradition, with an electric bass stepping in for the tuba; and the feel-good “Everybody In The World” (which features the New Breed Brass Band) finds common ground in our universal desire for love and acceptance. But it’s perhaps the electrifying title track, which lands somewhere between Earth, Wind & Fire and Shorty’s old tourmate Lenny Kravitz that best encapsulates the spirit of the album, wrapping earnest emotion in a high-octane package that offers you no choice but to move your body.

“The whole time we were making Lifted, I couldn’t help but think about how much fun it would be to get onstage and play it for an audience,” Shorty recalls. “Usually when I make an album, I record the songs first and figure out how we’re going to present them live afterwards, but with this record I was in the studio imagining the lights flashing on the hits and the audience singing everything back to us. I could see the whole thing in my head.”

For Trombone Shorty, the show never ends. Not by a long shot.