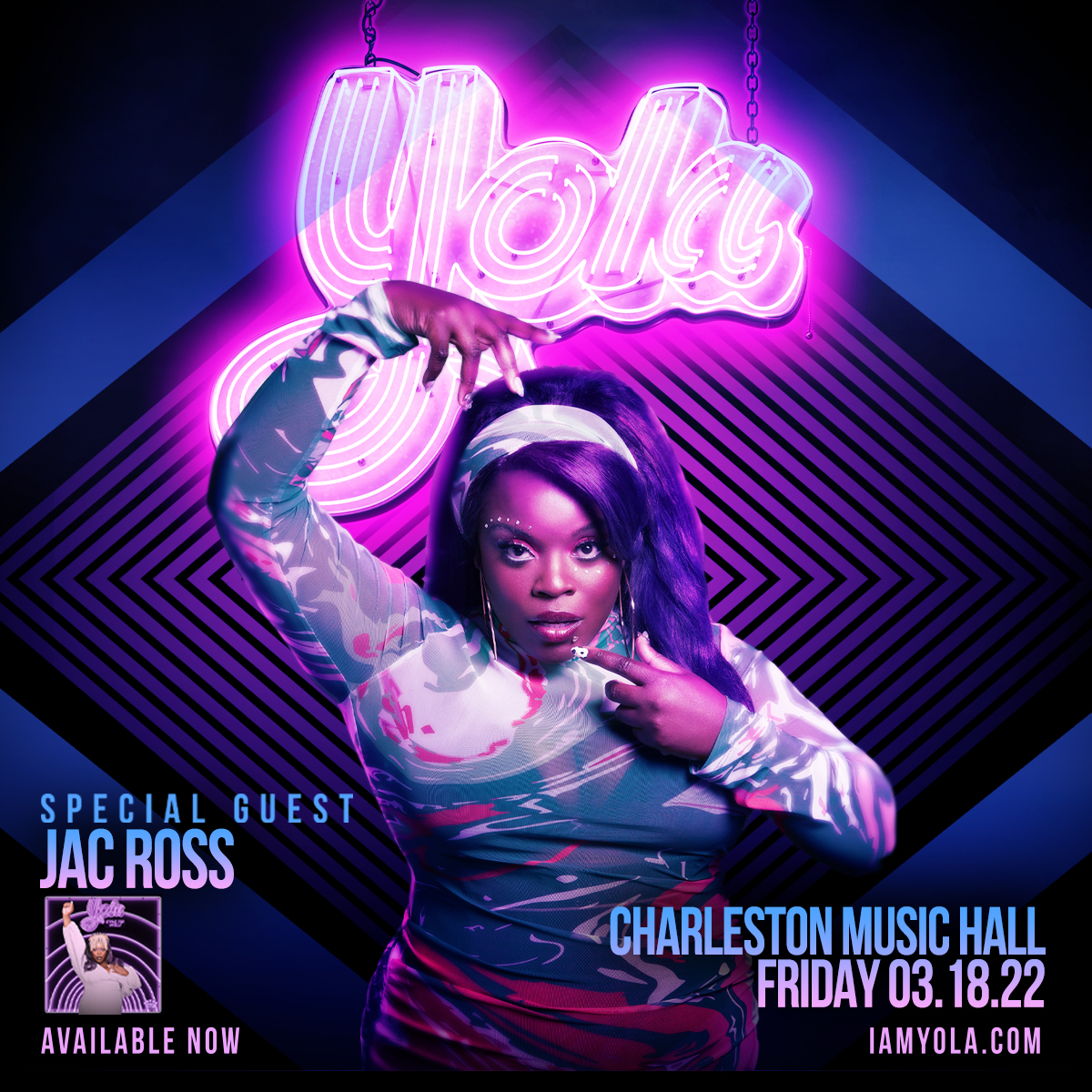 Please note Yola is requiring all fans to provide proof of a negative COVID-19 test within 72 hours OR full COVID-19 vaccination for entry. More details available at charlestonmusichall.com/faqs.

In a time when change is needed more than ever, the enigma Jac Ross emerges carrying enough pain to incite cultural change and the love to remind us we’re all the same. For Jac Ross, his soul-stirring vocals are deeper than the ears that hear them. The sounds of his voice tell the stories of struggle and success, but most importantly impress a glimmer of hope in the hearts of those who witness his silky and powerful harmonies.

Jac Ross embodies the iconic voices that shifted culture with songs such as “What’s Going On?”, “Change Is Gonna Come”, ”Strange Fruit”, “Fight The Power” and “The Blacker The Berry”. Singing upbuilding lyrics that advocate for cultural, social, and political issues, the vocal agent of change draws from the struggle of his own life experiences, almost like a Ta-Nehisi Coates-esque novel to deliver riveting engaging music that represents his community.

Raised in the small town of Live Oak, FL, Ross’ adoration for music emanated from a bevy of factors. Exposed to an array of iconic soul and r&b singers, paired with the influence of his father’s career as a preacher, Ross’ precocious

talent was nurtured at the early age of five. Though he came from a very strict household, Ross’ parents skillfully cultivated his talents by allowing him to dictate his own pace and tempo as a musician.

As the self-taught pianist was polishing his craft in high school, he later bloomed finding interest in basketball, earning some attention to play on the collegiate level. Ross’ decision to decline those offers was due to his faith, love and confidence in his musical prowess. After completing high school, the determined musician gave himself seven years to make it in the music industry.

During his seven-year climb, Ross’ journey was an arduous one. Ross’ hardships included recording in the dining room of his house, his child being born with a paralyzed arm — to his family being evicted to pay for their daughter’s surgery. Still, despite those colossal setbacks, Ross’ unwavering faith served as the vehicle to his glorious comeback.

The self-proclaimed “Faith Dealer” noticed his luck changing when his co-writer Mezo, encountered R&B savant, Rodney “Darkchild” Jerkins at a mall in Florida. After an exchange of emails, Jerkins fortuitously opened the one which included Ross’ song “Gotta Be Mine.” Mesmerized by Ross’ spellbinding vocals, Jerkins asked for the rising singer to come visit him in- person for a meeting at his Orlando home. There, Ross delivered a riveting rendition of Sam Cooke’s “A Change Is Gonna Come” and an original song he crafted called “Freedom.” Enthralled by Ross’ musical makeup, Jerkins elected to sign the singer to his label Darkchild Records and work with him on his debut EP.

After recording a whopping 88 songs, he and Jerkins began shopping around at different labels in hopes of finally finding a home. In 2019, Darcus Beese, President of Island Records personally signed the singer and now, Ross looks to shake the world with his debut project in 2020.

Off to a speedy beginning, the emerging talent has already captured the attention of Ms. Cathy Hughes, founder and chairperson of Urban One Inc., who handpicked the crooner to open Urban One Honors, a televised special. The standing ovation received from cultural heavy hitters such as, Jamie Foxx, Billy Porter, Missy Elliott, Brandy, Chance the Rapper and others on his debut tv performance— speaks to Ross’s unique ability to capture audiences and his music that uplifts people of all ages. With more to come from Jac Ross, he has already begun to cement his place as the premier artist to watch going into the next decade.